Are tiger farms bad? If we stand back and just get a gut feel for this question, a lot (a majority, I would say) of us would think tiger farms are hideous. How can we take the most popular wild animal in the world and farm it!? How can we turn such a proud and precious animal into farm livestock? It sounds disgusting. "To me it is disgusting," Valmik Thapar (a prominent conservationist) thunders. "It's not civil to have tiger farms; it's not part of anyone's dream." (I have quoted Mr Thapar and I am sure he will allow it).

But if we put away all sentiment it could be argued that tiger farms are a good idea at least on first impressions. 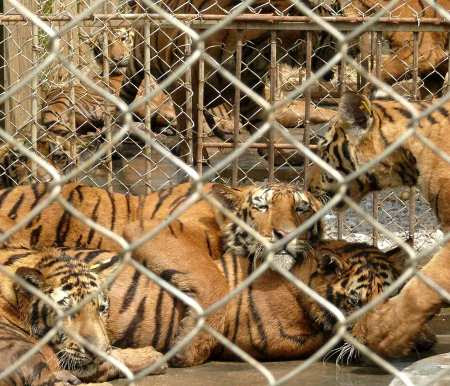 Farms like these are selling tiger bone wine and other products. The photograph (which I have selectively cropped), is by International Tiger Coalition. People are free to use this image on condition that they provide a credit. I can feel the stress these tigers are feeling cooped up like this, wholly unnaturally.

If the tiger has been poached to extinction (nearly) or its habitat and prey eroded to the point where it shares land with people to the demise of the tiger and a few people, then tiger farms are one way, on the face of it, to reduce poaching and preserve this big cat in the wild. And the unsentimental will say, "what is the difference between a tiger and a rabbit?" Both are wild animals and both are used for the pleasure of mankind, in one way or another. So why aren't we shouting from the rooftops about the rabbit or the horse, which is eaten by some people.

The reason why a gut feel is, in fact, the right feel is because tiger farms are a complete fraud and a sham. If they are meant to be a means to help preserve the wild tiger, they don't work. It is even more basic than that, it is simply about money, nothing else, making money from tigers in a cruel and uncaring way.

One reason why they are a sham, and dangerous to the wild tiger and not a benefit to them, is because the people who own and run these farms are lobbying the authorities (presumed CITES - Convention on International Trade in Endangered Species) to allow tiger parts from the farms to be traded (in breach of CITES currently). If that is allowed, it is argued that, the trade in tiger parts will be encouraged and expanded and muddied up at a time when it is most critical and important for there to be a tightening up of CITES restrictions and not a loosening up. 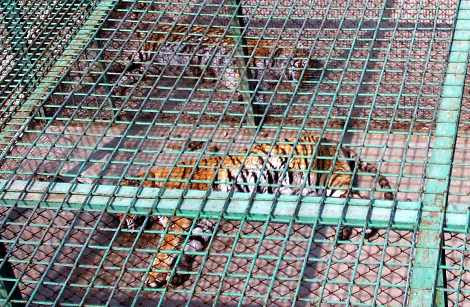 Tiger Farms - Photo by International Tiger Coalition and thanks to Big Cat Rescue for showing these pictures on their website.

Here are some other reasons why tiger farms are bad: 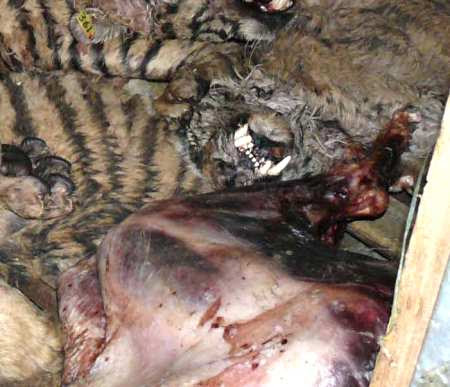 Yes I know we are disgusted by this image, those of us who have retained a sense of what is right. What you are looking at is the most popular wild animal in the world reduced to trash and meat, chilled flesh and bone, bereft of dignity. The owner of this farm was keeping what was left of the tiger bodies (you can see one has been skinned) until it becomes legal to trade in body parts. And CITES had asked, formally, China to investigate illegal sales of tiger meat at the Guilin farm. What is CITES doing asking China to investigate? This is preposterous. It is like asking the police to investigate an assault perpetrated by an officer on duty. Do we ever get a result from such an investigation? No. It is like the kind of investigation carried out by the Financial Securities Agency (FSA) in the UK (charged with monitoring the bankers) in investigating financial frauds -- forget it. It does not work. There is not enough independent and neutral control and management.

And it really is about attitude. I have yet to see someone talk about the attitude of people who find doing what is illustrated normal and acceptable. Surely this is at the root of the problem. Some people (sadly a lot of these people are in an area which is near where the tiger's habitat is) just find it acceptable to treat tigers as livestock. Actually, it is worse than that, you wouldn't treat livestock in some countries as the tiger is treated on tiger farms. I am sure that if a health and safety official visited a farm in the UK and found cattle lying around like these dead and mutilated tigers, he or she would make a formal complaint. So I conclude that the Chinese people involved in this business (not all Chinese please note - I don't want someone saying that I am racist, I am not) think of tigers as livestock on a farm. Many millions of people in the west think of tigers differently. And allowing tigers to be farmed will simply perpetuate this outdated and outmoded attitude.

The only long term answer is to educate and change attitudes and that will require the agreement of the Chinese government. To get their agreement there has to be a financial reward. The loss of the tiger in the wild is a world problem. The tiger belongs to the world and the world must find a way to save this animal.

The overriding problem, though, is that the majority of the people of the world do not know about this or if they do, they don't care sufficiently. How many people know about tiger farms? How many people ask whether tiger farms are bad? Lets guess, 2 million in the world. That represents 0.033 percent of the world's population, an infinitesimal amount and of no consequence. People generally, globally simply do not know or care enough to change things. And I am not being critical. It is just human nature.

It is shocking to realize that, "The 171 member nations of CITES made it clear last month that ‘tigers should not be bred for their parts and derivatives.'” The Chinese tiger part dealers are particularly bothered about this statement, are they? No. Some say that the Chinese have banned (in line with CITES) tiger body parts, but I for one don't believe it. The body parts of wild tigers are still being traded because no one is enforcing the CITES ban and there is too much money in the trade, which becomes more valuable as the tiger becomes rarer. Another factor: it costs 250 times more to raise a tiger in captivity than it does to poach a wild tiger. Killing wild tigers is more economically viable. 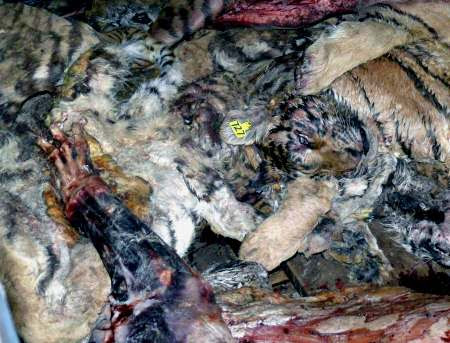 OK, what else is bad about tiger farms?:
I have to quote John Stellar, CITES's enforcement chief: "Wild tigers are about to go down the toilet, and we don't seem to be doing anything about it. The international community has been pouring money into this, and we have failed." As I have said we need a completely different attitude and really we need to shut down all Chinese tiger farms. CITES can't do this. No one can except the Chinese government and they are a very cynical government and will never do anything that undermines their power. Upsetting business undermines their power base. And tiger farms are big business. The problem should be tackled from a business perspective. 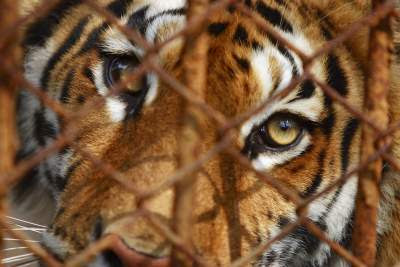 Tiger Farms - Save me please - Photo by International Tiger Coalition.

On the basis, as mentioned, that the tiger belongs to the world (and not humans) and its extinction in the wild is a world problem, I suggest this as a solution to the tiger farms problem: