I am a great admirer of Big Cat Rescue. And of the founder Carole Baskin. I have never met her. I only know of her from what she says on her website. And it seems to me she is a person of energy, courage, intelligence and great tenderness, a real women to be admired! You have got to have these qualities to achieve what she has and I am sure her late husband played his part in starting and her current husband devotes all his time on the project. No doubt he has played a massive role in making Big Cat Rescue what it is. But am I being naive? 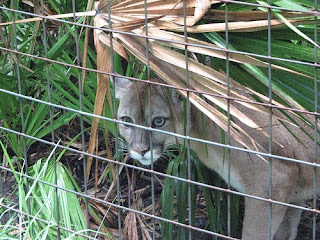 She seems to have simply started by accident, almost. She and her late husband went to a business selling Bobcats and found a fur farm. That moment changed the direction of her life. She and her husband bought the entire Bobcat kitten population (56, yes, 56 cats) of that Minnesota Fur Farm and took them home! That was the start. She wouldn't do it again she says knowing what she does now. But she and her husband keep going and keep rescuing. She receives heartbreaking correspondence from people with requests for help. Heavens she must go through a lot of agonies what with the management, the funding and the heartbreak of trying to stem the flood of cats that need rescuing. {Comment: I personally would not approve of her going to buy a Bobcat as a companion animal for her then husband. It would seem that the original motivation to go to that Minnesota fur farm was the wrong one. On that basis was the motive to rescue all 56 kittens as pure as she says? I think it was by the way}

As she so correctly says, the bigger picture is stopping the production line of cats that need rescuing. Carole mops up the mess it seems to me. She obviously does more and acts on a wider scale but essentially that is what Big Cat Rescue seems to be about. She makes the point that it is hard to manage the bigger picture because of a lack of accurate information. It is all ad hoc and insufficiently controlled it seems. The lack of regulation and control by the authorities has resulted in there being, for example, 4,000 tigers alone in Texas, just one State in America. There are about 7,000+ tigers in the wild worldwide. The comparison is stark and shows the madness.

Her work can be very frustrating in trying to make fundamental changes that solves the problem at root. She does see hope, however. Changes in laws governing ownership of big cats have made an impact as has educating the public on keeping big cats. I think Big Cat Rescue has played a major role in changing things for the better.

There are bound to be opponents to her efforts. These will be the people in the business of dealing in big cats, a lucrative business. These people will try and undermine her operation. I would expect too that Carol Baskin would admit to making mistakes. This is bound to have happened as she started off an untrained big cat rescuer (as I understand the beginnings). If you work and learn at the same time mistakes and bad decisions will get made but is that a reason to criticize? Obviously not. I don't know the operation sufficiently to comment but only if she and the employees are actively, knowingly and intentionally conducting a course of action that is against the professed objectives of Big Cat Rescue can they be criticized and I don't see that. I see a lot of cats being rescued and living a better life.