Australian authorities are the biggest cat poisoners on the planet

It is extraordinary to think that the biggest cat poisoners on the planet bar none are almost certainly the Australian authorities. They'd have no compunction whatsoever in poisoning millions of cats if they could. As it happens they have killed probably hundreds of thousands by poison. It is called 1080 and recently they chucked tons of frozen sausages laced with 1080 out of helicopters. We don't know how many feral cats or other animals were killed by this crude mass poisoning method but we can estimate that it'll be a lot.


They also have an automatic cat poisoning device which squirts a jet of poisonous gel over cats that pass in front of it. They say other animals are unaffected so it only kills cats. Do you believe that? Not me. It kills dogs. 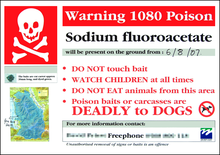 They set a terrible example to others. Poisoning cats is a crime. And here we have Australia legalising a crime. They are saying that it is not a crime. This is confusing to people who read about Australia's cat poisoning programmes.

It would not surprise me if cat poisonings by cat hating individuals have increased since Australia's inhumane desire to kill millions of feral cats was publicised. You can't decriminalise a crime because it is done by the government. This is what Australia is doing.

Antifreeze is the most common cat poison. And you know that the manufacturers of antifreeze could make their product for cats if they used a different chemical or added a bittering agent. It is weird that cats are attracted to the taste of it. All they have to do is make it taste horrible to a cat but they don't bother to do it. Why? Money? Or are these manufacturers working with governments?

There are many articles on cat poison on this site and the main site. Please search but don't poison cats. It is a crime as mentioned and a terrible thing to do.