Showing posts from May, 2015
Show All

Well, I hope you found it as heart stopping as I found it. It is a bit shocking. We don't know if the cat was uninjured despite running away. Cats do this even when injured. Such a fall may have injured he chest and/or chin. I'd be surprised if he/she was uninjured. What was she doing trying to climb that wall? And what is the person doing recording the moment? Was it set up and why did the cat turn near the top? He actually recorded it using a motor driven still camera as this is an animated gif file, not a true video although I call it that for convenience.
5 comments
Read more 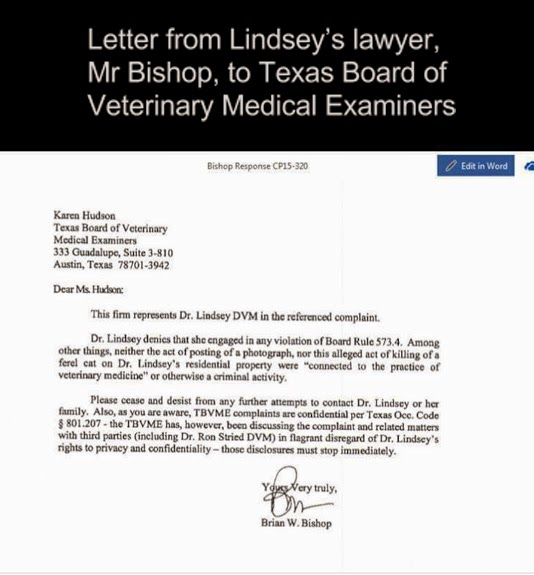 Lawyer for Kristen Lindsey defends his client in letter to Texas Board of Veterinary Medical Examiners This is a cross-post as I want to spread the word on this one because there is considerable public interest in the outcome of the Texas Board of Veterinary Medical Examiners' investigation into the alleged criminal behavior of Dr Kristen Lindsey in killing her neighbor's cat with a bow and arrow while in her backyard. If you click on the link you can read more . Below I reproduce the letter again. Lindsey's lawyer says that her alleged behavior has nothing to do with the veterinary profession. Do you agree that? I don't because the attitude and personal standards of a veterinarian are crucial to how she conducts herself at her workplace. Compassion is an essential ingredient to being a decent vet. Lindsey has demonstrated her fondness for killing animals - the opposite. Additionally, the way vets comport themselves outside of work impacts on the profession as a wh
Post a Comment
Read more

How I cured a fox of mange by hand feeding

This is another cross-post. It was an event in my life about five years ago. A lot foxes where I lived had mange. Mange is an awful parasitic disease which causes hair loss and great irritation in foxes. There are many urban foxes in London. I used to fed this female fox and she got mange. I could easily tell because her tail lost its fur. And then other parts of her body. It was distressing. I sourced a homeopathic cure in liquid form which I poured over chicken slices. In the early hours of the morning I offered them to her and she took the chicken from my hand tenderly in her mouth. There was never any chance of a bite. She was a gentle, trusting fox. Over many weeks her mange disappeared and her fur came back. One day under the bright sun on the manicured lawn she rolled onto her back and wriggled around in delight. She was pain free. I could tell. From that day on I have not seen her again. I believed she had been shot by a government employed hunter who I believ
2 comments
Read more

May 20, 2015
Rich arabs in the UAE tend to be fascinated with possessing exotic animals and a favourite is the cheetah. Why the cheetah? Because it is quite a shy, retiring large wild cat species which is fairly easy to handle and which has been employed for centuries to go hunting with their human 'master'. The big problem is the rich arabs of the UAE circumvent regulations and treaties such as CITES to smuggle these animals into their country to populate their private zoos whereupon, through gross ignorance and a lack of sensitivity, they gradually starve the animal to death via neurological disorders. Some UAE residents haven't a clue how to care for a large cat. It will please and amuse them for a while and then it will die at which point, I suppose, they smuggle in another. They are disposable, you know, even if they are endangered. Only this month a post-mortem on a cheetah revealed carpet in it stomach. It must have been so hungry it ate carpet. These arrogant, exotic cat o
Post a Comment
Read more

Three Siamese Cats on the Rampage 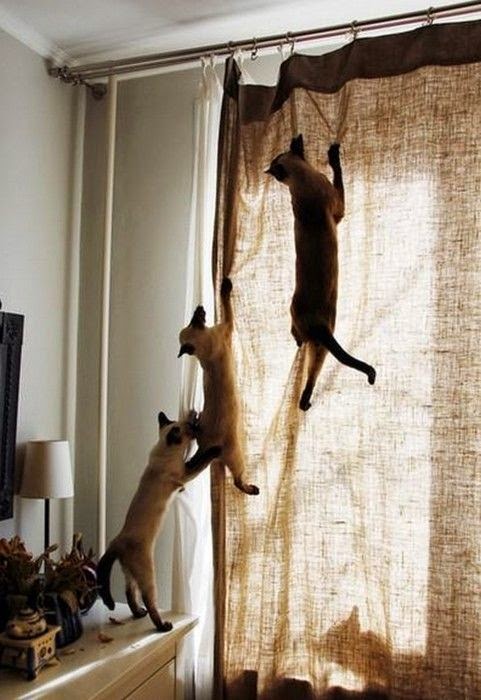 This is a nice picture: It tells us that claws are useful so don't declaw ! It tells us that cats can be a bit destructive sometimes but it isn't their fault. They are only behaving naturally in an abnormal environment that contains our possessions. If it was outside it wouldn't matter. This is cat play. Ideally there should be specific places in the home where it can happen with a minimum of destruction but that may be somewhat far fetched.
Post a Comment
Read more

Check out the bacteria in your cat's digestive tract

May 18, 2015
The bacteria in our digestive tract and the digestive tract of our cats is an important facet of our health. I believe that IBD in cats is caused by damaging stomach flora . Certainly this is the case with humans. Four scientists at University of California, Davis are offering cat owners the chance to find out about their cat's digestive system microbiome. I think this is an important study because, for example, if we say that dry cat food is far from ideal and caused health problems, studying the bacterial contents of the gut will tell us how that type of food affects a cat and whether that affect damages health and in what way. Very little is known about a cat's gut bacteria. It would nice to discover that dry cat food causes problems because it would put pressure in the manufacturers to up their game. Participants have to collect their cat's poop and send it to the scientists who will provide a analysis in return. This is a ten year project. I don't have de
Post a Comment
Read more

It is almost impossible to catch cat abusers and murders 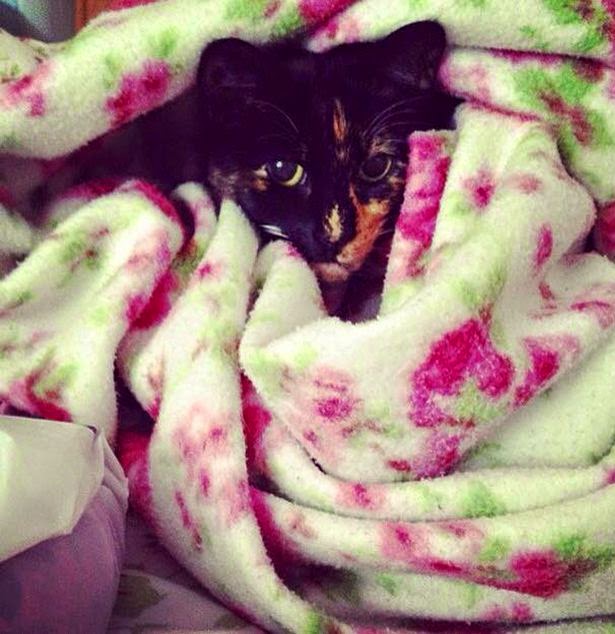 To a loving cat caretaker/guardian the death of your cat at the hands of brutal abusers is like murder. But when this happens it is all but impossible to find the murderer because outdoor cats wander sufficiently and at dusk or in the night. There are no witnesses. Even when the cat survives it is no good because cats can't be a witness. Tabitha I am indirectly referring to a cat decapitation in the UK. A vet certified that two knives were used to cut off the head of a 13-year-old calico cat whose name was Tabitha. She was found outside in a puddle without her head. The head has not been retrieved. She was much loved. Tom Whitfield, the owner, feels it was a trophy killing. It may be. It may also be some sort black magic coven. Witchcraft is hidden in the UK but that does not mean it is rare. The RSPCA are investigating, as usual. The vet who made clear that the killing was deliberate and by humans rather than another animal has cleared the way for the RSPCA to try and
1 comment
Read more 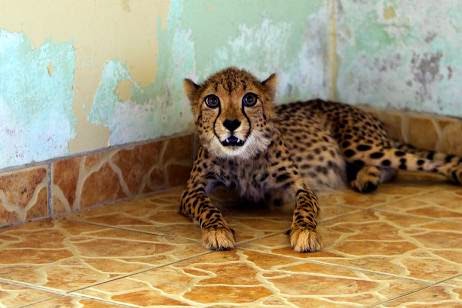 Poor diet causing major health problems for big cats in private UAE zoos | PoC This is a cross-post. In the UAE - the Middle East if you want to generalise - animal abuse is not uncommon although we rarely hear about it in the West. Nearly all the stories about cat abuse come from America, not because Americans are animal abusers but because there is far more internet activity and reporting of animal abuse in America. In Abu Dhabi,  it seems that everyone is rich and with riches comes arrogance and ignorance. Add that mentality to a desire to own a flash car and a flash cat and  you have neglected large wild cats because in Abu Dhabi flash cats means large exotic cats smuggled into the country. A survey found that about 30 percent of the captive cheetahs and lions in Abu Dhabi within private zoos were malnourished because of  a poor diet of chicken flesh without any supplements - bones and stomach contents and added supplements. Plain chicken meat would make any cat ill ove
Post a Comment
Read more 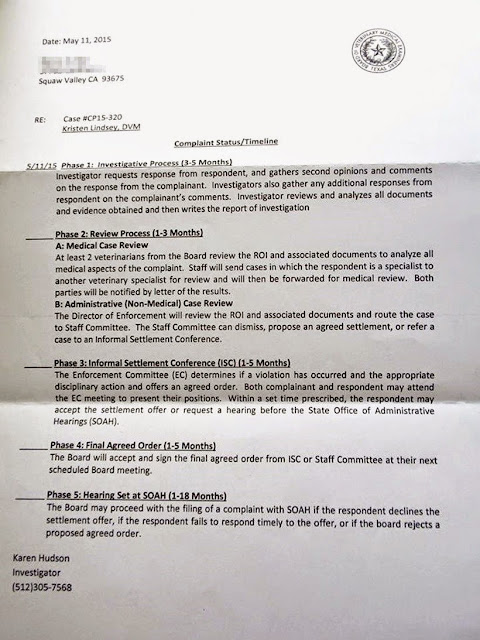 Complaint about vet who killed cat will take up to three years to process This is a cross-post. The link above discusses the same topic. Don't hold your breath! I expect that you are familiar with the now infamous veterinarian Kristen Lindsey who proudly declared to the world in a Twitter feed, with a photo of her holding a cat with an arrow through his head, that she enjoyed killing him. If you haven't heard about her this link will fill you in. A complaint was made to the Texas Texas Board of Veterinary Medical Examiners (the Board) requesting (I presume) the revocation of her license. The response was standard and it indicated that the whole evaluation process of her right to practice veterinary medicine and what they intended to do would take up to three years. This is a lengthy timetable. Perhaps that is convenient for the Board because the longer it takes the more likelihood there is of it being kicked into the long grass and forgotten. People have short memories
Post a Comment
Read more
More posts