Showing posts from December, 2014
Show All

- December 29, 2014
You know that the news stated that the Top Gear Team were attacked in their cars in the extreme south of Argentina by an angry mob who where protesting about the presence of the Top Gear team (31 of them plus the three presenters: Clarkson, May and Hammond) because Clarkson's Porche 928 V8 had a number plate that hinted at the Falklands war lost by Argentina. To the Argentinians the number plate was provocative. I have watched the two part program and I sense the whole thing was set up by Clarkson and the BBC because they needed something special and entirely different to keep the program vibrant and maintain audience figures. What I mean is the offensive number plate and even the protest was arranged before the filming started. That is my allegation. Why? Because of the way the presenters acted. They finished on a Sundance Kid style ending and in the middle of part one they visited the house where Butch Cassidy and the Sundance Kid stayed (when escaping the law). It all tied
Post a Comment
Read more

When the love of someone else's cat overcomes money considerations 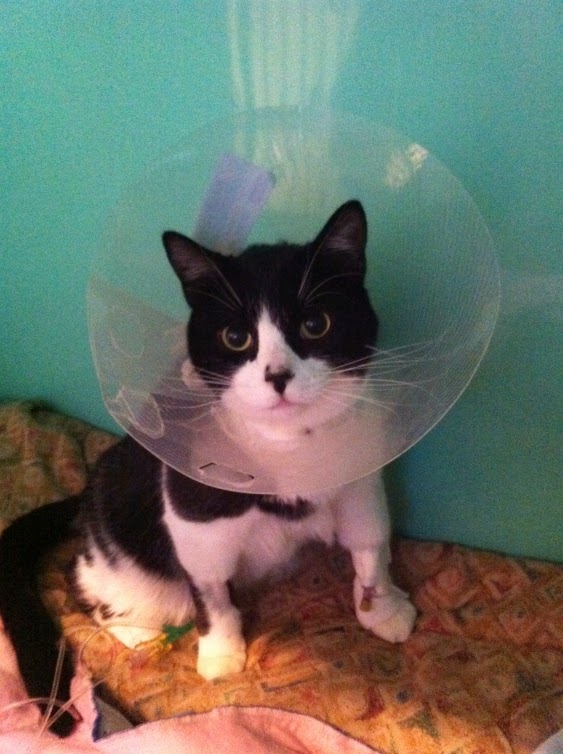 This is a cat story to warm the cockles of your heart. It comes from Victoria, Canada and it concerns a veterinary assistant whose name is Nadine McCully. She is aged 26. One of the veterinary hospital's clients was a Mr Sutton and his one-year-old cat is Leo. Leo had urinary ttact problems and after a week's treatment with catheters the clinic was unable to resolve the problem and accordingly Mr Sutton decided he had to say goodbye to Leo because he couldn't afford the surgery required which was to enlarge the urethra. The cost of the operation was $3000. Leo It appears that Nadine had become attached to Leo in her work and she had also apparently noticed the attachment between Mr Sutton and his cat Leo. It was those two emotional factors which compelled her to pay for the operation out of our own savings which I guess must've been a sizeable chunk. Nobody at the clinic had ever heard of this happening before. Mr Sutton was staggered by this young woman's g
1 comment
Read more

What Causes Struvite Crystals in Cats?

- December 20, 2014
What Causes Struvite Crystals in Cats? If you click on the link above you can read a full article on this topic but in summary the most likely cause of struvite crystals in urine is stress in combination with dehydration which may be caused by a diet of exclusively dry cat food. Add in a bacterial infection and other reasons why a cat is not drinking enough (i.e. poor water quality) and the likelihood is increased. Another compounding factor is not urinating enough perhaps due to an unsatisfactory litter box. The cure is to keep flushing out the urinary tract and a pleasant environment.
2 comments
Read more

- December 16, 2014
Confusion over What the Pope Said or Didn’t Say about Animals Going to Heaven | PoC This subject has been chewed over endlessly now by a plethora of Internet news websites and the vast majority of them initially, it appears, made a mistake in stating that Pope Francis made an off-the-cuff remark that animals go to heaven. To be honest, if you believe in heaven then animals have an equal right to go to heaven as humans.  In fact, you could say animals have a greater right in humans because they are all innocent whereas humans are far from innocent. So this discussion is rather pointless unless you are a devout Catholic and a conservative Catholic. In any case, the initial stories about Pope Francis appear to be incorrect and the whole thing has been fabricated by the news media not intentionally but in the same way that a message handed from one person to another becomes distorted, gradually. The beginning of this sorry saga starts with an Italian newspaper which appears to have take
1 comment
Read more 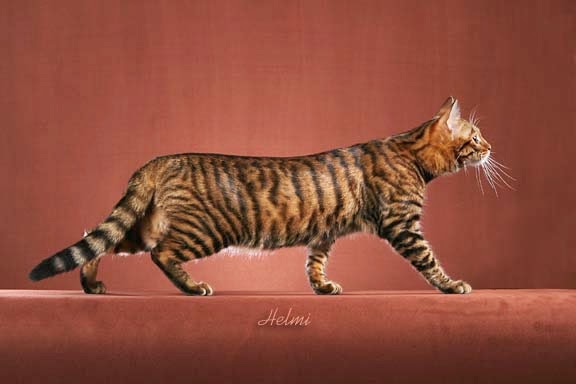 There is one particular cat breed which is wholly designed, and which has been bred, to look like a tiger and that breed is the Toyger . This is an amalgamation of the word "toy" and "tiger". Below is a picture of the Toyger. As far as I'm aware, there are no known cat breeds other than the Toyger which are specifically designed to look like the tiger . I expect many people have heard of this breed. It remains relatively rare. Photo copyright Helmi Flick.   I suppose you have to ask the philosophical question as to whether it is foolhardy to try and replicate the tiger in miniaturised form through selective breeding of the domestic cat. From my perspective it is a ridiculous idea but there are many people who would disagree with me. It seems that the policy behind the project is the same the lofty ideal behind the wild cat hybrids: to bring the wild into the living room. The big defect with the Toyger is that they'll walk like tigers because that is
Post a Comment
Read more

Plastic in the Oceans Affects Us All Including Cats 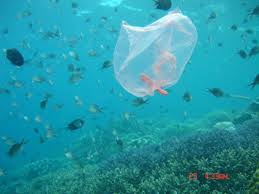 The Mediterranean Sea is the worst of them all in terms of the amount of plastic floating around in it. There are 900,000 pieces of plastic per square kilometre in the Mediterranean Sea. Most oceans had up to hundred thousand pieces per square kilometre. Overall, there are 5.2 trillion pieces of plastic in the seas and oceans of the world which weighs a quarter of 1 million tonnes. These are estimates but they are based on what I consider to be a fairly sound basis. There were 24 expeditions to all oceans and two forms of counting plastic. Plastics were collected in fine nets. The larger pieces of plastic were counted at sea. The observations were conducted at more than 1,500 locations over a six-year period. The results are published in the online journal, Plos One . What is disturbing is that a lot of the plastic in the seas and oceans is going missing and the conclusion that the scientists have tentatively come to is that the fish and sea birds are eating it. For example, the
Post a Comment
Read more

- December 12, 2014
I think you will find that the most common reason why cats lose hair is because of over grooming. The question that follows is, "why is the cat over grooming?". Perhaps the most common reason why cats over groom is because of stress. Stress can be caused by a number of situations and events and it would be impossible to list them all here but perhaps the most typical would be stress caused by other cats in a multi-cat household. Another cause of stress would be the owner being away too much causing separation anxiety. It is up to the owner to figure out what is causing the stress. This will take a certain amount of observation of the behaviour of the cat or cats in their home and should become quite apparent very quickly what is going on. After stress, the obvious reason why cats over groom is because their skin feels itchy. This leads to another secondary question namely why does the skin feel itchy? The most common reason for this is probably the flea bite allergy. Secondar
Post a Comment
Read more

- December 12, 2014
This is hardly about cats but it is, perhaps, indirectly about cats. Internet users appear to be falling out of love with Facebook and Twitter. This may be because the majority of users on Facebook are younger people and they have taken to using new services such as Instagram and Snapchat. Ofcom, the regulator of telecoms and media in the UK, said that the portion of people who checked their social networks weekly had fallen from 65% a year earlier to 56% in October 2014. Apparently Facebook and Twitter are also on the wane in the United States and Japan together with China. The rate of decline in those countries is slower than in the UK. It appears that Facebook has become unfashionable with younger people which indicates that it is more fashionable with older people and with respect to this it may be the case that middle-aged and older cat lovers now spend more time on Facebook than they did on cat websites. A lot of Websites have a Facebook presence and it is almost as if that th
Post a Comment
Read more

- December 12, 2014
New Zealand's veterinarians have decided that there is a need in their country to take a serious look at the growing cat population which they say requires urgent action. I'm pleased to read that they wish to take a humane and scientific approach to what they describe as cat management. In addition, they stress that the focus must always be on responsible cat ownership. In addition there needs to be an all-encompassing, holistic approach from local and national government in order to achieve real results. I think we can see that when there are ad hoc, piecemeal changes made to legislation it doesn't work very well. The president of the New Zealand Veterinary Association, Mr Merchant, states that "a strategy to address our growing stray cat population is long overdue, and must include a clear focus on responsible cat ownership." What Mr Merchant is saying is in stark contrast to what was put forward not so long ago by a NZ scientist who recommended that in
1 comment
Read more

What sort of news is cat news?

- December 11, 2014
Cat news is invariably about one of quite a narrow band of topics. One of these topics is feral cats. There are quite a lot of people who dislike feral cats and some of these people are in authority. You could say in fact that the people most likely to dislike feral cats are those who are in authority. Some of these people are scientists and they write up studies about the feral cat and they are often derogatory. There are critical articles about the feral cat. With respect to the feral cat the real issue is that there are too many of them and they spread disease and of course above all else they kill too many birds and there's a huge amount of bias. With respect to the feral cat these are the stories we see on the Internet. With respect to the domestic cat,  the most common news story about the household cat is the fact that he/she is far too often unwanted and finds his or her way into shelters where regrettably too many are put to sleep because nobody wants to adopt them. Th
Post a Comment
Read more
More posts