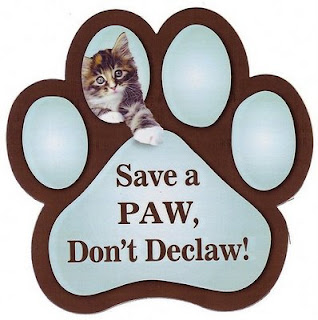 The psychology of declawing (Onychectomy) is interesting and very human. This post applies to the United States of America. Declawing (for non-medical reasons) is banned in these countries (this is not a comprehensive list):
"Declawing is legal in most US jurisdictions. It is estimated that 25% of owned cats in the United States are declawed (Patronek 2001)."(src: Wikipedia - verbatim publishing is allowed under CC) -- This translates to about 20 million cats - big bucks (see below).

The psychology of declawing includes the use of language. The word "declawing" is highly misleading and is one of many coping strategies that we as humans have devised either consciously or unconsciously to allow us to deal with the obvious moral wrong of the process. This post deals with some of the methods that we as owners and veterinarians employ to bury the problem.

The psychology of declawing is driven by profit. An immediate point that comes to mind is that behind all the psychological coping strategies the underlying reason for declawing is money (profit). This creates the dilemma which we cope with as described below. This applies to all things to do with animal suffering. And I am afraid to say that vets play a major role. The American Veterinary Medical Association say this about declawing on their website:


Declawing of domestic cats should be considered only after attempts have been made to prevent the cat from using its claws destructively or when their clawing presents a zoonotic risk for its owner(s).

A typical vet who abdicates the responsibility for decision making on declawing to the cat's owner who has no doubt been misinformed by a vet as to the operation. See this post about this vet at this animal hospital for opinion on this.

Comment: Do vets check with the cat's "owner" before carrying out the operation? No, not always it seems. Sometimes vets don't even explain the nature of the operation. The client is often unsure because of the ambiguous nature of the common description "declawing" and the vet technicians are sometimes told not to explain that it involves the removal of the top joint of the claw. This is counter to the ethical process of informed consent. To act like this is:
Veterinary surgeons use emotionally distancing language and decontextualized texts in their text books to the point where they are able to believe that they are meeting their declared purpose namely, "relief of animal suffering", when the procedure, if anything, achieves the opposite. This is the language of the surgeon's textbook:


"The claw is extended by pushing up under the footpad or by grasping it with Allis tissue forceps. A scalpel blade is used to sharply dissect between the second and third phalanx over the top of the ungual crest. The distal interphalangeal joint is disarticulated, and the deep digital flexor tendon is incised.. . . Both techniques effectively remove the entire third phalanx" [this means the amputation of the distal phalanx or part of the toe]

The psychology of declawing includes inadequate (misdirected) leadership by the veterinarian associations (and the legislators). In reference to the American Veterinary Medical Association website statement above, the concept of cats using their claws destructively is ours. For cats it is not destructive. Does the concept of "using its claws destructively" apply to scratching furniture. And if so are clients asking vets to declaw for that purpose? And if a cat scratches us it is frequently due to our lack of prudence or knowledge of a cat's behavior. This our fault and a cat should not lose a part of its toe for this reason. A cat's claws and toes are very important to a cat.

Both client (cat owner) and service provider unwittingly or deliberately collude in the process of making the whole thing acceptable by distancing themselves from the problem:
Please Note: I like America and Americans but strongly dislike their seeming acceptance of declawing.

Other posts on declawing:

From Psychology of Declawing to Home Page

Psychology of Declawing - Photo by Feral Indeed! (she's a star) and published under a Attribution-NonCommercial-NoDerivs creative commons License -- this site is for charitable purposes in funding cat rescue.