The Sportsman's Handbook on Skinning a Tiger 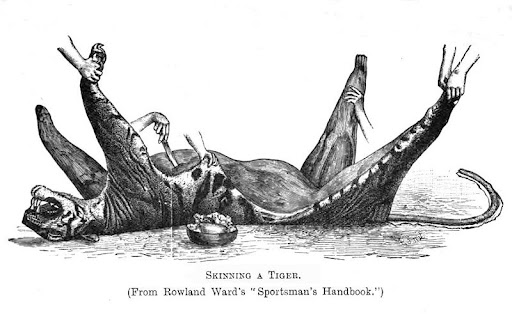 Mr Rowland Ward wrote many books about various aspects of hunting at a time when it was considered perfectly natural (late 19th century). It still is by a large section of the community, sadly. And some people don't even go into the jungle to hunt tigers, they do it in a zoo! Take the people who tranquillized (with home made dart guns) a rare Siberian tiger in a zoo in central China (Yichang City in Hubei province) (src: http://www.newser.com). The animal had been stunned, killed, beheaded and skinned for its body parts. Tigers in China are just too valuable for their body parts. The Chinese have set up numerous captive breeding programs (tiger farms) to produce the parts. It is the ultimate indignity to the world's most popular animal.

I wonder if these people who killed this Siberian tiger used a copy of Mr Ward's The Sportsman's Handbook on skinning a tiger? You know I wouldn't be at all surprised if they did. Rowland Ward is still in business. There is a website selling all things to do with hunting. Even a book called, "The Big Five", referring to the best big animals to hunt and for trophies. The collection of wild animals referred to includes the tiger and lion and provides information on, for example, the "best places to go today for each species, and a discussion of where the best trophy quality may be obtained" (I have taken the liberty to quote, I hope you don't mind).

See: Tiger Farms and be disgusted.

The only form of tiger hunting that I know about are canned hunts, in which tigers are released from captive programs into a limited area and shot by some moron for a trophy. The Rowland Ward website clearly endorses this kind of behavior.

The Sportsman's Handbook on Skinning a Tiger to Bengal Tiger Facts