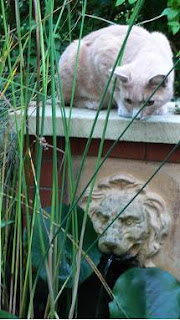 Here's why a Maine Coon cat paws at water. Actually I am not sure! What I am talking about is Maine Coon cats pawing at their water bowl. And what I mean by that is using his or her paw to poke and prod the water before drinking it. It can look like the surface of the water is being brushed away by the paw. What is that about?

I think we have to go back to basics to get an answer, back to wildcats and wildcat behavior and natural animal behavior in respect of survival behavior as all behavior is ultimately based on survival methods. Depending on the individual, Maine Coon cats like water or are interested in water. Other cats like it too, such as the Bengal cat a wildcat hybrid. The Bengal cat likes water as it is a throwback to the Asian leopard cat ancestor that lives by water as it is a source of food in and around water. Some cats fish (Asian Fishing cat) and tigers are strong swimmers. In other words the classic idea that cats don't like water is not, in fact, true. Although some, of course, don't like it - normal variation between individuals.

On the basis of what I have just mentioned, what comes to mind the most readily is that this smoothing or adjusting of the surface of the water is a precursor for fishing. Yes, it sounds odd but cats do fish. Cats like fish and humans also smooth and adjust the water's surface to help see into the water. It can temporarily remove reflections in the water, which allows fish to be be seen for a fleeting moment, sufficient to scoop up the fish with their paws. See Cats Fish.

Helmi Flick, a friend and fine photographer says this about her 4 cats on this subject:

Zak, our Blue and White Maine Coon, paws at the side of the water bowl or glass of water before he drinks. Every time. I always thought it was to clear away the leaves (imaginary in my house) that might have covered the surface of the water bowl and was a throwback to being an outdoor cat.

Bushwah, our F1 Chausie, also pawed at the water bowl (or beside it) before drinking. Bushwah also pawed at his food after he was done as if to cover up the food that was left on his plate and save it for later.

My two British Shorthairs do NOT paw at the water bowl nor at their food. Maybe it's because they are more reserved or farther away from the wild? But then, neither does Quin, our Black Smoke Maine Coon, who is Zak's brother. Could it be that there's just a bit more "wild" in Zak?

My gut feel is that there is a bit more wild in ZAK or at least of that particular wild trait, if I am correct.

Maine Coon Cat Paws at Water -- Photo: by Libby published under a Attribution-NonCommercial-NoDerivs creative commons License -- this site is for charitable purposes in funding cat rescue. I know by the way that the cat in the picture is not a Maine Coon! Just a nice pic to illustrate the post.