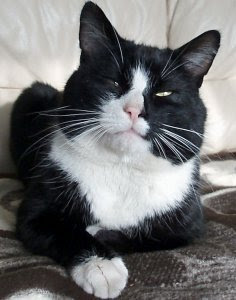 Many people don't realize that cats have different characters. And these character differences are often very noticeable to us, human animals. In some parts of the world people think of the cat as something that is unfeeling and robotic. These people think that humans own the world and animals were created to support humans and for humans to do as they please with.

If they were in my position they might think differently. I live with one companion cat, Binnie, an old girl of about 16+ years. She is overweight in mainly because she is frightened and defensive, making her static. I found her on the streets of London when she was young. So she is defensive, gentle and sweet natured. She likes to be handled gently and she likes a good brush and combing. Binnie will get grumpy sometimes when I don't respond to her requests. For example, she gets bored at night and wants me to interact with her so she calls out sometimes in a voice which pulls at my heart strings, wakes me up and I can't fail to cuddle her on the bed.

I had acquired 2 more part-timers (time share cats) but this has swelled to 3 more recently. The next is Timmy an intact (not neutered) male who is your classic alley cat. He is placid, calm and pushes his weight around with the others. He is top boy but I am above him! He is a bit like a young human sportsman; laid back. Nothing phases him but he likes his space and just does his own thing.

Then we have Pippa, a small girl cat (you can see these three on the Three Stray Cats site). She is athletic, friendly and nervous. She is very wary of danger and cautious. But very loving, sweet and loyal. She is the one who stays and comes back despite being pushed around by Binnie. Now Binnie wouldn't say Bo to a goose but she has to push someone around so its the cat at the bottom of the pile. Pippa has a sweet girly voice. Timmy has a stronger voice and Binnie (a big girl) is in between.

A newcomer is Martine. She is a fantastic looking moggie, a spotted tabby and white with a superbly striped tail. She trills like a Maine Coon cat and in fact may have some Maine Coon in her. Her face has the look of a Maine Coon but she is much smaller and a short haired cat. She is very active, inquisitive and wants to join in and play. So play I do. Timmy took at swipe at her and she gave a swipe back, the gutsy girl. After a while they get on.

These are the big character differences. There are aslo subtle differences that show in the facial expressions. Timmy looks a bit p*ssed off and swaggers a bit and Pippa looks concerned and impish. Binnie looks like a matriarch or an old school teacher and behaves like one, while Martine is like a rather glamorous youngish women who flirts a bit!

Cats have different characters and the more sensitive to cats we are the more apparent this is.