From Wildcat to Domestic Cat

March 06, 2009
This is a look, in outline, of the transition from wildcat to domestic cat. We are so used to the domestic cat that we forget sometimes that there were none some 9,000 years ago. There are an estimated 500,000,000 worldwide now. 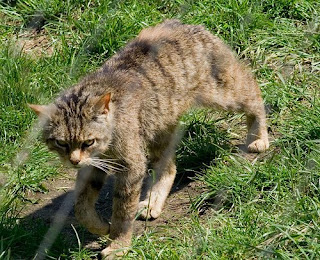 Scottish Wildcat, this is the Scottish version of the cat that domesticated him/herself thousands of years ago and physically the appearance is very similar. The Scottish wildcat is pretty tough and wild however. Photo by Fred Dawson

It is not completely clear as to when domestication first took place but:
The development of agriculture in Egypt along the Nile provided ample opportunity for the wildcat to find prey more easily around crops and granaries. Perhaps initially the farmers treated the small wildcat as a pest until realizing that her presence was beneficial in keeping down the rodent population that nibbled at the grain.

What happened next in the transition from wildcat to domestic cat? What was once a wildcat gradually became domesticated and changed:
The cat is a fearless and skillful hunter and this skill would have been used to kill not only rodents but snakes and other dangerous animals. Gradually the domestic cat became to be revered in Egypt and then worshiped (the god Bastet and see Egyptian Cat Art) The end of the beginning of the transition from wildcat to domestic cat was when the domesticated cat was exported by Egyptians and later Romans throughout the region.

From Wildcat to Domestic Cat to Cat History

Photo of statue of Bastet by adriaan bloem. Both photos: