International Enforcement is Needed for the Tiger 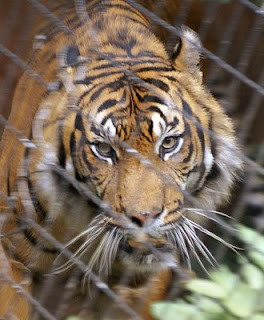 International Enforcement is Needed for the Tiger. I constantly see good intentions to save the tiger in Asia (remember the tiger is only found in Asia) thwarted by a failure to execute a plan. I made a posting recently about poisoning tigers and another about The Tiger is Doomed? In both the cases I feel that the Indian authorities could have achieved more and saved tiger lives if they had executed their plans to conserve the tiger more effectively. Another "failure to execute" has come to light. This is a saying commonly used by sportsmen like Tiger Woods. He plans a strategy but if he hits the ball badly by his standards that day he will have failed to execute the plan.

Another country manifesting a lack of proper execution of its plan is Indonesia. Whereas in China tiger parts are considered good for health when put into medicine, in Indonesia tiger body parts are thought to bring good luck (not for the tiger, obviously). This means that parts like whiskers, teeth, claws and skin, which is worn, bring the wearer good luck. And they also protect from black magic. Look I don't and won't criticize the people who wear these parts of the tiger but to believe in black magic is rather old fashioned, isn't it. That kind of thing went out of fashion 400 years ago, I thought. And I am not knocking some cultural thing. I am just making a comment about the archaic practice of black magic. Education would certainly play a role in drying up demand from the consumer. Another critical problem for the Sumatran tiger's survival is habitat destruction due to the timber trade. Habitat destruction for commercial reasons is a massive problem for the tiger in Asia generally.

The supply of raw product (the tiger) is drying up as a consequence of this ridiculously unacceptable trade. The latest plan (there must have been earlier failed plans) declared by the President of the Republic of Indonesia would seem to be the "Conservation Strategy and Action Plan of Sumatran Tiger 2007–2017" and made during the 2007 Climate Change Convention in Bali.

Yet in a press release by the World Conservation Union, Traffic and WWF dated 13th Feb 2008 (see report) it was declared that the laws of Indonesia have failed to protect the critically endangered (IUCN Red List status CR) Sumatran tiger. Body parts are on open sale in shops in Indonesia. The shop keepers don't even have to hide what they are doing. Any plan is going to fail under those circumstances. There cannot be any enforcement at all or very, very little. The survey estimated that tiger part sale had dropped between 2000 and 2006 due to less tigers being available for slaughter!:


I hope that they don't mind me quoting them (I provide a link in exchange: IUCN Red List) "Despite TRAFFIC providing authorities with details of traders involved, apart from awareness-raising activities, it is not clear whether any serious enforcement action has been taken." This points to lack of execution.

What I want to suggest is that when it comes to people in need of help to save people under dire circumstances, the world communities' assistance is more often than not requested and accepted. Isn't there a market for an international force of wildcat or wildlife enforcement officers who can provide a neutral and independent enforcement task force in countries such as Indonesia to save a fantastic wild animal? And this really is about saving a species from extinction in the wild for ever - the Javan and Bali tigers have already disappeared. I say that international enforcement is needed for the tiger survival in the wild bearing in mind the failed enforcement of plans throughout Asia. International Enforcement is needed for the tiger's protection in relation to habitat loss too, provided the governments enact the laws and are behind an international force.

Heather Sohl of WWF says that if people need help in enforcement they only need ask.

International Enforcement is Needed for the Tiger to Home Page

International Enforcement is Needed for the Tiger - Photo of a Sumatran tiger at London Zoo, UK by by TGIGreeny and published under a Attribution-NonCommercial-NoDerivs creative commons License (this wesbite is for charitable purposes - cat rescue).
animal abuse animal law animal rights human behavior Tiger