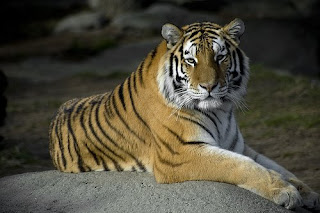 I have just done a tiger quiz in which one question concerned the tiger's stripes and the answer was that they are all unique like our finger prints. Tiger patterns and tiger stripes are a great way to identify individual tigers and it isn't like finger prints that are very small. A tiger's stripes are very pronounced and they carry a high contrast between the stripe and the ground color making them stand out.

So, we can identify a tiger by his or her pattern. But how do we get to see a tiger? They are naturally very secretive unless forced to approach us through lack of habitat caused by us (see for example cheetah habitat). Well, as we know, there are things called camera traps. These are cameras that are set up and left to be fired automatically by the tiger when it passes in front of the camera. Great, but the photographs will be from different angles and so on. This means a careful study, I suspect of photographs of known animals and a careful comparison made of the newly photographed tiger. A time consuming business, no doubt. However, bearing in mind these factors:
the identification of tigers by a better method was seen as desirable.

A smart bunch of scientists have come up with a computer program based on two algorithms (complex formula - "algorithm is a finite sequence of instructions, an explicit, step-by-step procedure for solving a problem, often used for calculation and data processing" - src: Wikipedia) that can compare images scanned in to a computer with images already on the computer in the form of a database to make an assessment as to similarity and to take into account all the variables as to image quality and position etc. a barrier to accurate identification.

As I understand it the system has a high level of reliability in matching similar patterns under what is variable conditions and angles. The creators of the system:
....say that it is "almost certain to place a matching individual from the catalogue at or near the top of the list of similarity scores". Anything that can help in the management of the rare wildcats must be good. I often read stories of poorly assessed population numbers. Recently the Indian authorities were shocked to discover that their estimates for the tiger population was much higher than was in fact the case. It was thought that the tiger population was 3,500 in the 1990s, an increase due to India's Tiger Project and the establishment of reserves. A more recent census indicates about 1,4oo. The reduction is due to poaching (to feed the insatiable China tiger body part market not doubt) (see also Poisoning tigers and Cats and Corruption). The monitoring of tiger skins through this computer program must be extremely valuable as the skin lives on, intact, after the tiger has been killed. [note: no criticism is intended of any culture or country in talking of poisoning tigers, for example. I am discussing things plainly that is all.]

I would be very interested to know how or if this computer program has been used in apprehending the traffickers in tiger parts. Thanks to Biology Letters.