March 24, 2009
Cat Inbreeding Means Poor Sperm -- Yup, I am back to some semi-pornographic stuff with a serious, very serious undertone. If you want to see some more popular animal science/porn, you might like to read and see cats mating or lions mating. The sperm quality of endangered, and therefore low population species, is of reduced quality. This concerns, for example, the cheetah and many more wildcats in the wild, see below and please note I have selected wild cats and the domestic cat for discussion for convenience only, the thesis covers any animal. However the cheetah and domestic cat were involved in this research. 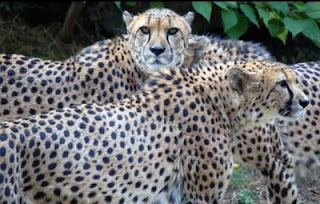 There are more abnormal sperm and less "motile" sperm in endangered species. This would also, it seems, apply to small populations in a fragmented habitat (e.g. Florida Cougar and Critically Endangered Iberian Lynx). The reduced sperm quality could explain "reductions in reproductive function in inbred populations" as the numbers of abnormal sperm and motile sperm are key factors in fertility.

In endangered species, with small populations inbreeding is obviously more likely. Also from a human perspective the scarcer and rarer a prized animal becomes (for its body parts) the more likely it is that it will be trapped, poisoned and skinned and butchered etc. This then is a "double whammy" on the chances of survival of already endangered species (of wildcat my area of interest). To the above we can add of course habitat loss and habitat fragmentation due to human activity (usually commercial) and it almost seems that the scarcer a wildcat becomes the faster the extinction process for than animal. It is a bit like global warming, it speeds up the nearer the "end game".

I guess this is not really news. We (people) do have rules on marriage after all that forbid inbreeding. In certain human cultures it is common to marry cousins. In these cultures there is a higher proportion of genetic illnesses. The same problem exists in domestic cat breeding. See Genetic Diseases in Purebred Cats, for example.

What happens in domestic cat breeding is that inbreeding depression results in defective and usually hidden recessive genes ("deleterious alleles" was the term used by the researchers) coming to the fore and causing illnesses. Also the immune system can be damaged. This is called "inbreeding depression", which can be defined as, "The loss of general health and 'vigor' that is sometimes a characteristic of animals that are inbred." The current research supports the fact that cat inbreeding means poor sperm.

The animals that were studied in this research project and their numbers:

Chart showing the relationship between the proportion of (a) abnormal and (b) motile sperm in endangered (filed circles and solid line) and non-endangered (open circles and broken line) mammals. The chart is copyright The Royal Society and published on this page of Biology letters: Endangered animals and sperm quality (my words). The numbers on the chart relate to the numbers animals above the chart.