The link between cat abuse and child abuse is illustrated in this fictional story based on a true story:


Chrissie, Laura's 8 year old daughter, came running in from the porch. Tears were streaming down her face. She was making those heaving sobs that come from the heart. It took her mother all of 5 minutes to calm her down before she was able to speak. Her mother was shocked. She had never seen her daughter so upset.

"Daddy said that if he saw the cat on the porch again he'll kill it. It just happened, Mummy". He took my cat from me and killed it in his hands. He just snapped little kitty's neck and threw her in the trash bin..."

Little Chrissie calmed down that day. But the pain remained for a long time.


"Cat abuse" can, naturally be substituted by animal abuse but it seems that cats are more vulnerable than dogs and therefore more likely to be abused by an abusive person in a household. Cats and dogs are the most common companion animal in households, which is why I mention these animals. I talk about cats as this is a cat site. 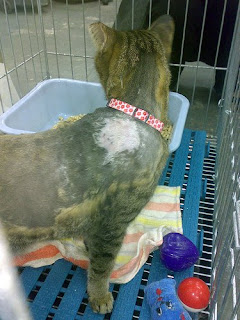 Apparently, there is little data and information on the number of incidences when children have witnessed both violence against their mother (most often) and the family's companion animal(s). As companion animals are very often considered to be a "family member" such experiences will probably be as traumatic as violence against human family members, maybe even more so. Certainly the combination of violence against animal and human is worth investigating. And the two, commonly, go together. In some States in the United States legislation in respect of animal violence proscribes an evaluation as to anger management in sentencing that includes as it is often caused by psychological problems.

Perhaps, as mentioned, cats are more frequently abused by violent spouses because they are more vulnerable. I don't know. I am making an assumption. There is, though, an undeniable link between cat abuse and child abuse and in these families the child is at an increased risk of abuse too. This is hardly surprising as a child is also a vulnerable creature at the mercy of a violent person.

It has been surmised that a child exposed to companion animal and parent abuse may lead to a propensity for the child to become abusive when adult to people and animals. This would be a learned process. Children learn from their parents by observation. Children who then, for example, are violent towards the family cat (in externalizing their problems) will inevitably harden their heart to violence leading to possible violence against people and criminality.

In research carried out in the USA, a survey of 50 shelters for battered women were asked the following questions and they provided the answers as indicated:


For the full report and discussion please see this web page: http://www.psyeta.org/sa/sa5.3/Ascione.html (this is the source other than from me of this post). I have been selective, modified and summarized. But actually it is frankly obvious that there is a link between companion animal or cat abuse and child abuse in the family. Both are vulnerable and a violent person will express that against the easiest targets. So it will both or either direct abuse of the child or indirect in the case of Chrissie above who will possibly or probably suffer psychological damage as a result of her experiences.