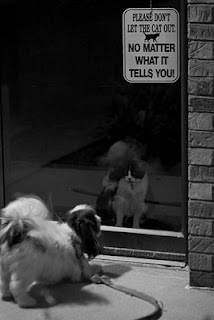 I'll keep this straightforward and as direct as possible as feline polycystic kidney disease is probably one of the best known and widely documented cat diseases. Lets analyse the language:

So, we can see that cysts form in the kidneys causing the kidneys to malfunction resulting in the cat becoming ill. Here is some detail. It is an inherited disease. It is found in these cat breeds primarily (Persians and derviates particularly) and in fact all cats to varying levels:

As mentioned the disease is inherited. It is caused by a defective autosomal-dominant gene. Autosomal dominant polycystic kidney disease (AD-PKD) is the most common genetic disease in cats (src: http://www.bristol.ac.uk). The cysts can normally be detected using ultrasonography. In 2004, the University of California Davis developed a DNA test for PKD. Accordingly, the disease is now detected by a genetic test from a swab taken from the cheek epithelial cells or from a blood sample. This saves a visit to the vet provided the sample is taken properly.

Because the gene has been identified, over time it should be possible to eradicate the genetic mutation from the breeding lines through selective breeding. I have no data on the current success rates. I am surprised in one way and not in another that these figures are not published widely. Is the incidence of feline polycystic kidney disease in, say, Persian cats on the decline because it should be and if not why not? Apparently positive tests for PKD have been found in virtually all the major lines of Persians, hence the very high incidence of feline polycystic kidney disease in Persians.

What are the symptoms? This is the kind of thing people who live with companion cats want to know, because it will inform them of the disease. It is a "late onset" disease showing up later in the life of the cat, typically at 7 years of age (source: http://www.felinepkd.com/). However, one breeder says she lost cats to feline polycystic kidney disease as young as 18 months of age and up to the age of 14. Obviously kidney function is impaired and they ultimately fail. The symptoms of this disease are then the symptoms of kidney malfunction (i.e. when the presence of the cysts reach a stage when they cause renal failure - when 2/3rds of kidney function is lost - src: Susan Little DVM, DABVP (Feline)), which are:
Kidney failure (total loss of function) is apparently certain when the cysts grow and cause ill health. There is cure for feline polycystic kidney disease.

Click on the following link if you would like to read about Feline Kidney Disease generally. Clearly this short post is to provide us with sufficient knowledge to take immediate steps to see a veterinarian as soon as the symptoms become apparent. As mentioned, the symptoms are those of kidney failure or the kidneys failing. The underlying cause needs to be identified and it may not be feline polycystic kidney disease.

Photo: A Vet's cat - by fotobydave and published:

liposculpture guide said…
it is possible to remove fluid from the cysts, this prevents pain, but does not cure the disease. Generally the problem takes many years to develop and most cats will not show signs of feline polycystic kidney disease until they are approximately seven to nine years of age.
30 January 2011 at 23:43

Unknown said…
To understand the processing is necessary to give a brief summary of how the work of the kidneys. A cat with only a few cysts of growth of small and low, can live to old age and eventually die of something unrelated to Polycystic Kidney Disease.
18 February 2011 at 22:26