Stopping the Inappropriate Elimination of Cats 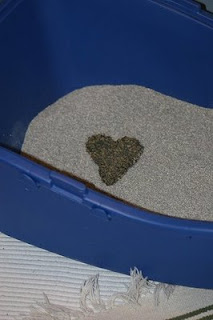 Also, inappropriate elimination can be due to medical reasons (e.g. urinary tract infections such as cystitis), anxiety marking and/or not liking the litter box. If a neutered cat is spraying it is probably due to anxiety and the cause of that is probably something that we are involved in (e.g. letting stray cats wander in). If the cause of the anxiety cannot be identified vets sometimes prescribe Prozac incidentally, which has a high success rate (but which I find rather sad to be honest).

This post is about stopping the inappropriate elimination of cats for cat litter reasons.

Inappropriate elimination has been described as the use of places in the home that are not suitable (outside the litter box) rather than as a communication signal in territorial marking. In this form of going to the toilet, cats often deposit one of the two forms of excrement in the litter box and inappropriately use another place for the other form.

Some factors that cause inappropriate elimination that are litter box related:
These are called "initiating factors". This means that these are factors that start the problem (for us) of inappropriate elimination. These factors cause the cat to become averse to using the litter box and using another location. Lets remember that to us it is a litter box but for the cat it is just one area of the home to go to the toilet. Over time the cat becomes habituated to using the wrong area and the presence of the urine or feces makes the area acceptable and usual. This is a reinforcing process.

Once all medical, hormonal and anxiety related problems are resolved the way to break the cycle and to build a method for stopping the inappropriate elimination of cats is to:
Some people take their cats to the vet for putting down because they are incapable of stopping the inappropriate elimination of cats, which as can be seen is really our problem. Following these techniques can save cats' lives as there is a success rate in the order of 72%.

From Stopping the Inappropriate Elimination of Cats to Home Page