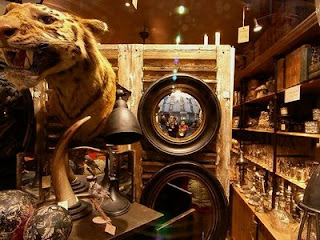 The laws on big cats and their "ownership" in America need to be dramatically simplified, unified and tightened up. What made me think about that? The severed head of a tiger lying on the road side in Lakemoor, that's what. I don't live in American. I like America and Americans (by and large) but I don't like the sloppy approach to the keeping of big cats.

There are 12,000 tigers in America and 7,000 left in the wild worldwide - say no more. A lot of these big cats are in private possession, with individuals and I guess the individual who lost his tiger head was one of these people. He was driving to get it stuffed. It fell off the lorry. The police became involved. It was not clear (at least at one time) whether it was legal to have the cat in the first place. It was clear though that it is illegal to keep a tiger on private property without a permit. So permits are obviously granted sometimes. It is illegal to import "certain big cats" across State lines or the U.S. border (federal Captive Wildlife Safety Act). Zoos and certain organizations are exempt. But the Act does not ban "big feline ownership". 19 States of the United States prohibit private possession of "dangerous cats" ( I presume that includes all big cats).

Do you get a feel for the difficulties in figuring out what the laws on big cats is throughout America? I am confused, certainly. Bearing in mind the dire state of the tiger in the wild and the lack of overall commitment that there is in the world to save the tiger in the wild why can't the laws in the USA be amended to take this into account?

For example, this is my suggestion as a starter on Laws on Big Cats:
Nice and simple for all to understand or how about this - Laws on Big Cats:
This proposal will infuriate the people who make money from big cats, the breeders etc. Tough. It is time, as Obama said, for change. And I don't want to hear people say that this will affect "my rights". Yes, it will slightly, but the right to own or possess a rare and dying species (that requires hundreds of square miles of range) in the back yard of a house or at a petrol station (Truck-Stop Tiger - Lousinana - see video below, an horrendous and callous commercialization of the tiger) are over in the same way the rights of bankers to rip off the public is over. It is time for change in respect of Laws on Big Cats in America.


These are the words of the video maker: "At the Tiger Truckstop near Baton Rouge, Louisiana, not only do they keep Tony, a live tiger kept in a crummy little cage exposed to the freeway, their restaurant keeps a stuffed white tiger above .." I don't think he'll mind me quoting him. This is his YouTube Channel (his YouTube home page): http://www.youtube.com/user/journeyman47

We all give up some of our rights in a community. We have to to make it work. It is time we allowed the animals of the world some dignity and gave them back some of their rights, some of the basic rights such as a right to life, that they possessed before humankind trampled all over the planet, destroying it, and took those rights away.