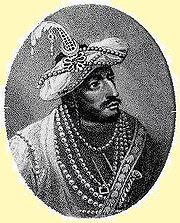 The Tiger of Mysore is in the news and for me India is a very important place for the world. It is the front line in the battle to save the tiger so I would like to link a story about the sale of the Tiger of Mysore and the tiger itself. This is a golden tiger's head encrusted with precious stones from the throne of Tipu Sultan, who was known as the "Tiger of Mysore" and who was, in effect, the ruler of the Indian Kingdom of Mysore from 1782 until shot by the British in 1799. So we are talking about 2 tigers both of which are not actual tigers! I mention a third below.

Mysore is in Southern India (see map below). Tipu Sultan is considered India's first freedom fighter. The golden tiger's head is the last remaining from the Sultan's throne, which was broken up by the British East India Company's forces in 1799 when the Tipu Sultan was also shot dead.

The object was taken by the person who oversaw the East India Company, Baron Wallace of Knarsdale and has remained with the family, forgotten, it seems, in a bank vault for the past 100 years or so. It is estimated to be worth about £800,000. It may well fetch more if an Indian gentlemen wants to bid for it, which will, I am sure, be the case as this object has a very fine pedigree indeed. I don't know the history of the East India Company but clearly they upset this ruler as he gave his life in the cause to kick them out of India. It could it seems be argued that the Tiger of Mysore was stolen. Perhaps it was considered to be one of the spoils of war. I wonder if there is an argument that it should be returned to India. And if returned or bought by an Indian it should either symbolise the revival of the protection of the real tiger populations or help to fund tiger conservation.

The clockwork tiger automaton depicting a the death of a European soldier by a tiger, a gift (or made for) Tipu Sultan.

Tipu Sultan was a scholar, poet and soldier. A devout Muslim his subjects were Hindus. He practiced all the things a devout Muslim should. Tipu Sultan liked inventions and it seems, boys toys. One such toy is famous and it is a tiger automaton (clockwork tiger - see above). It was made for him personally and no doubt pleased him very much as it portrayed a tiger attacking a European soldier. Tipu Sultan was at war with the British. It is said that the clockwork tiger was made to show the killing of Hugo Monro a senior army officer who had defeated Tipu but who had been killed by a tiger on 22nd December, 1792 on Saugor Island.

This is where Mysore is:

Tipu Sultans got his title, "Tiger of Mysore", because it is claimed he killed a tiger with his knife, his gun having failed to go offf. His life in brief:

From Tiger of Mysore to Home Page