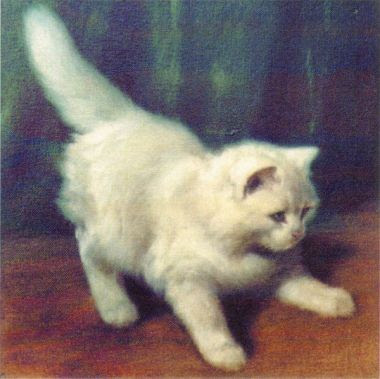 The kitten in the painting is described by the artist as a "Junge Angorakatze" (Young Angora cat). This is a Persian cat, I am sure. The artist is well known. He was a German-Hungarian painter who lived from 1872 to 1931. This nicely covers the beginning of the cat fancy in England. Arthur Heyer specialized in feline and canine subjects. He seemed to like Persian cats and I would not be surprised to hear if he lived with a companion Persian cat, possibly a white one!

He often painted scenes of cats and dogs together. His cats and kittens paintings are his most popular. It is interesting that he called this cat an Angora cat. At that time this was the terminology for a long haired cat. Both the Turkish Angora and Persian (traditional appearance by modern standards) were around at the time of Arthur Heyer. The use of the term "Angora cat" is confusing and I am still not completely clear on how the term was used in the early years of the cat fancy. See Angora cat. I think Heyer also lived with a bulldog as bulldogs and white Persians feature a lot in his work. His work is still very popular and sold widely on the internet.

Angora Kitten - Photo of painting: this is in the public domain as copyright has expired. It is from the Wikimedia Commons library and the person who uploaded it was user Mazbln.
By Michael Broad at March 30, 2009