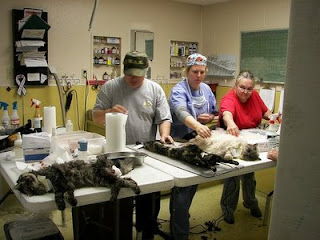 In research carried out on feral cats it was found that cat neutering increases body weight significantly with increased body fat, in line with confined and socialized companion cats (see: http://www.psyeta.org/jaaws/abv5n3.shtml). What is the science behind this?

The Purina site says that the reason is a change in metabolism and "activity levels normally decline with maturity". I don't understand the connection in the second reason. As to the first reason, "metabolism" is defined as "the set of chemical reactions that occur in living organisms in order to maintain life" (Wikipedia). Another website endorses this reason saying that the cat's metabolic rate deceases by about 20%. Obviously food intake needs to be reduced accordingly. A vet's site in the UK says that there is also an increase in appetite so reducing intake of food is going to be hard.

Another site says that neutering causes a hormonal change. So the change is metabolic and appetite caused by an altered hormonal balance. Wikipedia says, "[they] have an increased risk of obesity. Theories for this include reduced metabolism, reduced activity, and eating more due to altered feeding behavior". In short we don't know exactly what is going on.

I would like to know what is actually happening inside the body? Well, I found a proper scientific paper on the subject. These are some summarized notes from this paper (http://jn.nutrition.org/cgi/content/full/132/6/1730S):
Neutering Induces Changes in Food Intake, Body Weight, Plasma Insulin and Leptin Concentrations in Normal and Lipoprotein Lipase–Deficient Male Cats by Marc L. Kanchuk, Robert C. Backus3, Christopher C. Calvert, James G. Morris and Quinton R. Rogers