Difference between Wildcat and Domestic Cat

The difference between wildcat and domestic cat can be quite fine and difficult to detect at first glance and to the untrained eye. The Scottish Natural Heritage (SNH) Scottish Wildcat Survey is due to be published. The people who conducted the survey had asked the people of Scotland to assist by recording sightings of the rare and very elusive Scottish wildcat that lives in north east Scotland and whose habitat is the "margins of mountains and moorlands". They produced an image that usefully shows the difference between the:
Here is this useful image, which I have taken the liberty to publish here. A credit is also reproduced and a link to the Scottish Wildcat Association provided. 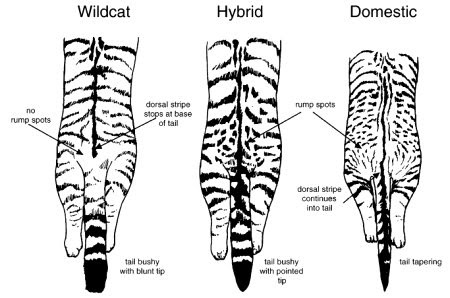 Image showing the difference between wildcat and domestic cat

As I understand it, the Scottish wildcat is a subspecies of the wildcat found throughout Europe (Felis silvestris). This image may help in detecting other cases of hybridization that have taken place amongst other wildcat populations.