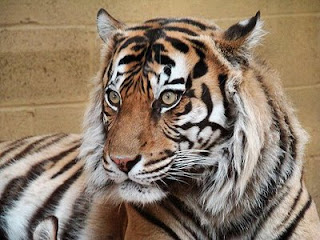 Why do you think that there is an increase in Sumatran tiger attacks in which 9 villagers have been attacked and by all accounts, eaten by a tiger? Yes, eaten. Humans are not prey for tigers. It is therefore rare for tigers to eat humans. They are not the right kind of prey. Yet tigers in Sumatra and going for humans. That can only be due to one thing, a scarcity of the tiger's usual food, her usual prey.

And in turn a shortage of prey can only be due to one or both of two things. The prey is being caught and eaten by humans and/or the prey is becoming more scarce for the same reasons that the tiger is becoming scarce and that reason is that the habitat in which both animals live is diminishing in size. 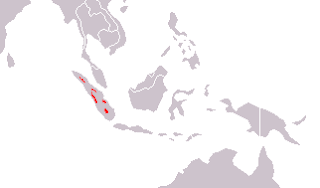 The Sumatran tiger (Panthera tigris sumatrae) lives in lowland and mountain forest areas. Sumatra's lowland forest areas are shrinking at the astonishing rate of 2,700 square kilometers per year. This is a size larger than the state of Luxembourg, in Europe, each year. Some tigers live on reserves and some (100) live on unprotected land that will be given over to agriculture. The so called reserves are unsafe as the tigers are attacked by poachers (I guess protection is poor or corrupted). Poaching is no doubt funded by the trade in such highly commercial enterprises as Chinese Medicine. The Chinese government do nothing to regulate it. There are alternatives to using tiger body parts in Chinese medicine but these are not used in China it seems (they are in America).

Above in the video, Sumatran tiger cubs in captivity. We might as well accept it, now, that this is the way it will be in the future. We actually do accept this already, tacitly, as nothing is happening to change the downward population trend of this precious and rare wild cat. In fact the downward trend is it seems speeding up.

As usual, the total number of Sumatran tigers is unknown, but is probably about 400 in the wild. Why are there Sumatran tiger attacks? Because the shrinking forest means that the tigers' habitat it gradually reduced as is his or her prey. Human and tiger are forced for ever closer together and the tiger is understandably hungry. The outcome is obvious. Of course, the people defend themselves and kill the ever more precious and scarce tiger. As the human population increases the problem gets worse and as the tiger becomes more scarce the price on tiger body parts become more valuable making it more profitable to kill and poach, which in turn results in less tigers and so the downward spiral continues to extinction in the wild, which is very close now. The Sumatran tiger is considered critically endangered (CR) by the IUCN Red List (see IUCN Red List for Cats and also IUCN Red List Assessment) but does anyone listen to or is anyone concerned by the Red List? Well some are but the poachers and the villagers who kill this tiger are not. They aren't even aware of it and the authorities who are aware of the problem don't see it as a problem, just as a source of income.

This chart shows the correlation between human population and tropically forest cover:

Sumatran tiger attacks will continue to occur and get worse as long as the forest is eroded by human population growth and or farming expansion. I also wonder if the villagers are not too concerned by attacks or are they real attacks? Lets remind ourselves what a tiger penis is worth in China ($6,000 - see Bengal tiger facts). Perhaps they welcome an attack and use it to financial advantage.

Some more recent posts: Sumatran Tiger and Deforestation in Indonesia
The sad reality is that forest clearance is often illegal. This is testament to the lack of government controls and very shortsighted and short term view taken by what must be corrupt authorities and greedy businesses. See a list of articles on the wild cat habitat and its decline.