What makes a man eating leopard? It is the activities of people, the human animal. We create the situations in which leopards are forced to attack people, usually, perhaps always, children and women. So what do we do? 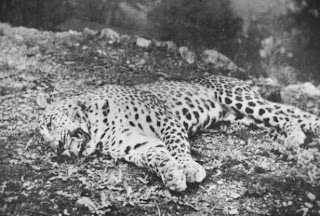 "Panar Leopard" -- Famous man eating leopard shot dead 1910. This cat was forced to attack easy small human prey because it was injured by a poacher.

We:
It is said that no one knows why leopards become man eaters. Well there is one thing we know. If there was sufficient prey for a tired and old leopard it wouldn't need to go near people and I am sure leopards are happy to steer clear of people. So one reason is, as mentioned, human activity in reducing prey populations either by killing leopard prey ourselves or eroding the habitat in which the prey lives.

Beyond that obvious reason there is then the fact that for an injured or old leopard, a child is easy prey. If that is the case why don't we take precautions? I keep saying this but we created the conditions under which a man eating leopard develops so we owe it to the leopard to solve the problem but not at the expense of the leopard. The trouble is it takes a certain mentality to do that and that mentality does not exist very often in villages in India.

Take the oak jungles of Danpur, where a man eating leopard once roamed about 35 years ago. There is little natural prey there, apparently. I guess there was at one time. This leopard attacked children and women. Indians feel that once a leopard has eaten human flesh it wi 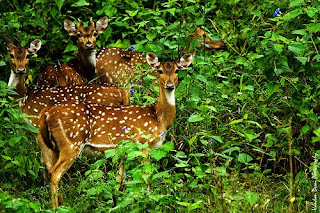 ll come for more and they fear most the female man eating leopard because they think that she will teach her young to attack and eat people. I know of no scientific research to support this. This is most likely to be anecdotal or just plain story telling. I don't know but my gut feel is that a leopard will simply take the most convenient prey. The easiest available prey. It will not bypass easy prey just to have a taste of human flesh - come on guys. "The leopard consumes virtually any animal it can hunt down and catch" (src: Wikipedia). The preferred prey weight is 25 kg (55 lb). In southern India the preferred prey is the chital, a deer. The leopard will only resort to attacking people if conditions demand it.

Even today when the leopard is formally declared Near Threatened (NT) under the IUCN Red List, we still don't know enough about this cat. I also think that NT is an under assessment brought on by political and business pressure. I am not sure about the Red List. It can work two ways. It can highlight problems with species loss and mask problems. I really am not sure about its accuracy. We rely on it too much, I think.