The Tiger is the World's Favorite Animal 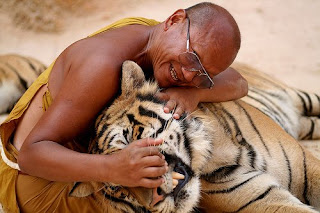 We don't care if the tiger is the world's favorite animal (poll carried out by Animal Planet). This is how the poll went. The figures are the percentage of people who voted:
What of the domestic cat? Not sure. But if there are more domestic cats than dogs or at least a very similar number (figures vary but a 2005-2006 National Pet Owners Survey indicated 73 million dogs, 90 million cats in the USA, which is the classic laboratory for companion animal "ownership") I don't see how this survey can be correct. For a moment I thought the poll was only about wild animals but as the dog is in this list, it can't be the case. I find the result impossible to believe except that the poll covered 73 countries, which may indicate that in some countries the popularity of the cat is very low. This would seem to be the case more in the East (Asia etc.) because the cat is perceived as being of less use, it is not a working animal and is eaten, while a dog can be both a companion and a utility animal.

Anyway I haven't got to the point that I wanted to make. Search for news using Google news search for information about the tiger, the worlds favorite animal and what comes up? Bloody football, that's what! We name teams after the tiger as it is an animal that we respect (but not enough to preserve it for future generations clearly as it is endangered and gradually becoming extinct). The tiger is fierce (perfect for a football team) on the outside and noble and discerning on the inside (quote: Animal behaviourist Candy d'Sa).

But tiger news? We get footballing tigers, Tamil tigers, Tiger Woods, Flying Tigers (American airmen in the second world war) and so on and so forth. Out of the first 20 listed results we have 2 on the real tiger, one concerning a planned Malaysian tiger park, which is being criticized because it will, it is argued, further, endanger the tiger in the wild and the second about 2 tigers and a lion rescued from a private individual's collection (my guess) because they were neglected and in desparate need of help (see Texas Tigers are Unwanted). Both the tiger stories, were, then stories of doom and gloom regarding the tiger.

The tiger is the world's favorite animal but it is less important that Tiger Woods and a small time football team somewhere I know not where and don't care. The 2 stories that are listed bear that out. The world must decide, collectively, whether we care enough about the tiger to keep it in the wild. My firm opinion is that we care about the tiger but only to the point that we keep it in captivity and on our strict terms. The tiger is the world's favorite animal but it competes with us for space and we are the world's top predator, we control the destiny of the tiger. We are also frightened of the tiger, remember.

The Tiger is the World's Favorite Animal to Bengal Tiger Facts