Children Playing with a Cat

This is a post in the series of Cats in Paintings. There are lots of cats in paintings as can be imaged (see Cats in Paintings). Cats are very popular subjects. I am very impressed by Mary Cassatt having just read her biography. She was an American lady born into a well-to-do family but was determined to follow her chosen career of an artist and make a living out of it. Her father objected but helped a bit financially (only a little bit mind you). She more or less made it on her own and against the odds as women at the time she was alive (1845- 1926) were frankly treated as second class citizens. They were "in the shadow of the man". Women still struggle get out of that shadow today.

Mary Cassat was born in Allegheny City (Pittsburg now), Pennsylvania but spent much of her working (painting) life in France. It was the time when Paris, France was the center of the Impressionist movement and it seems that she was inspired and motivated by the place and the people. She befriended some well known artists such as Edgar Degas and exhibited with the Impressionists.

At the time Children Playing with a Cat was created Mary Cassatt was concentrating entirely on mother and child subjects. It was a time when her was had a greater element of sentim 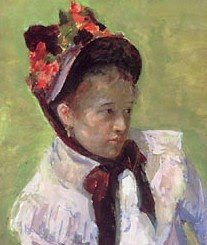 entality about it. This was probably disliked by some of her Impressionist friends from whom she had gained inspiration and advice. At the time she was 63 years of age and had been awarded the Légion d'honneur in 1904 by the State.

Looking at the picture brings to my mind how she achieved it. You know what they say about working with animals and children. I will presume that she worked from life and not a photograph, although photography was very much around at the time. Perhaps it was achieved in a series of shortish sittings.

Mary Cassatt's brother was better known than her during her life. He was Alexander J. Cassatt (1839 – 1906) the president of the Pennsylvania Railroad from 1899 to 1906. Although Mary Cassatt struggled to achieve recognition in her lifetime, particularly in the USA, her paintings are now very valuable, one being sold for $2.87m (2005) 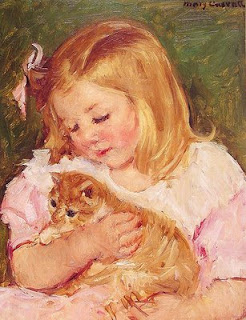 Sara holding a cat by Mary Cassatt - another sentimental and charming painting by this artist dated 1908 as well.

As to the cat in the painting it is almost certainly a very typical tabby and white. A straight forward moggie. I expect that is was painted in France, Paris, where she lived.

Children Playing with a Cat to Cats in Paintings

Children Playing with a Cat - Top Photo/painting: This image (or other media file) is in the public domain because its copyright has expired. The image is part of the Wikimedia library and it was uploaded by Cobalty.

Children Playing with a Cat - Lower picture is of the artist in a self portrait (cropped) and from the Wikimedia library (uploaded by user Civvi) and now in the public domain.

Bottom picture same as for the others uploaded into Wikimedia by Cobalty.
Email Post
Labels: cats in art