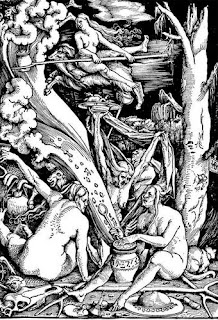 Witches as portrayed in Medieval times and notice the cat bottom right of the picture - a witches "familiar".

In theory, the image of the cat is positive in Islam because of the affection which Mohammed held the cat as he was saved from the bite of a snake by a cat. In contrast, Medieval cats were satanized in Christian Europe during the major part of the Middle Ages and the Rebirth. In the medieval symbolic system, the cat was associated with the bad luck and evil, all the more when it was black, embodying slyness with femininity. It was an animal of the devil and of witches.

Supernatural capacities were allotted to the cat, one of which was the faculty to have nine lives. The various waves of plague, due to the proliferation of the rats, as a consequence resulted in the reduction in the number of cats because people thought that cats spread the disease, when it was carried by parasites attached to rodents that the cat could have caught. The peoples' dislike and superstition of the humble medieval cat made the plague worse.

The domestic cat seems to have been universally persecuted in medieval times and killed at will in any ghastly way possible. Medieval cats had a very tough time of it, black cats particularly. There was probably a fear of cats and that fear is still with many people today.