Forest is the ocelot habitat. The forests are found in the areas indicated on the maps below. This is a Central and South American wildcat species. The type of forest varies: tropical and subtropical forest, tropical evergreen forest, dry thorn forest, semideciduous forest. The ocelot habitat also includes: mangrove and flooded savanna, abandoned cultivated areas turned to brush.

This is another range or distribution map based on the Red List map: 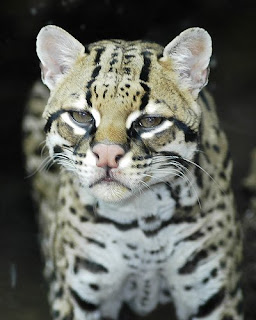 's habitat comes to an end and mankind's habitat begins in earnest. When human population reaches a certain level it pushes out wild animals through habitat destruction usually due to commerce, the car, hunting etc.

In the USA the Texas Ocelot is considered "vulnerable" (VU) under the IUCN 2006 Red List (a list prepared to summarise the risk of extinction in the wild of species). Vulnerable means this cat is threatened in Texas. In the other Ocelot habitats the cat is considered "least concern" (at 2006) under IUCN. This chart shows the categries. Least concern is the "safest" (my word) form of status under the IUCN classification:

The Ocelot Habitat once extended to a landscape called the "Chaparral" in the US (gulf coast - Texas).

Another ocelot habitat is the back yards of people's homes in the USA as a number of people have domesticated the Ocelot. This wild cat is not much larger than a large domestic cat (see largest domestic cat breeds) and is therefore suitable for domestication if one believes in that sort of thing. Another wild cat that has been domesticated is the Serval.

Here is a picture of an example of Ocelot habitat: 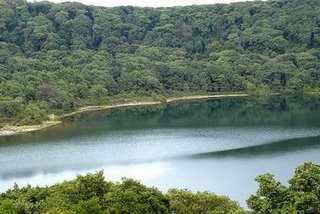