September 16, 2008
The Bagral cat or Machbagral cat is an experimental breed of wildcat/domestic cat hybrid. The breeding is/was taking place in America/Canada.

"Experimental breed" means what it says and this cat is not recognized by the cat associations. The Bagral cat is a cross between the wild Fishing cat (a classic small wild cat not that far removed from the domestic cat - see Asian Fishing cat) and a melanistic tabby spotted domestic cat. This sort of domestic cat is black with a faint spotted tabby pattern. 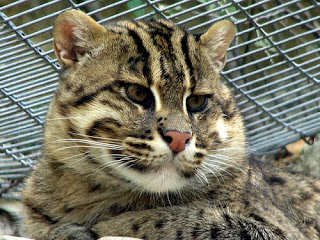 Fishing cat - photo by The Brit_2 - looks a bit like the Scottish Wildcat. Coarse tabby pattern, ideal camouflage. The ears are a lot smaller than is seen in some purebred cats probably because cat breeders like to produce big ears (sometimes) as these look more interesting. Sometimes breeders breed cats with extraordinarily large ears (see the Peterbald cat for instance). Ears play quite a big role in purebred cat breeding! The Persian has a round face and appropriately smaller ears to enhance the face. I personally love this kind of face - wild, strong and independent looking.

In the breeding of the Bagral cat or Machbagral cat, the objective is the same as for the other wildcat hybrids (such as the Bengal and Savannah), which is to allow people to keep a cat that behaves like a domestic cat but has the appearance of an exotic wild cat, in this instance a miniature black panther (black panthers are melanistic normally colored and patterned panthers). 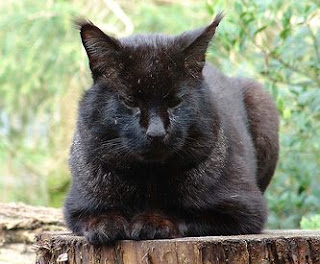 This is a melanistic Jungle cat a small wildcat that is used in the breeding (in normal pattern and color) of the Chausie cat another wildcat/domestic cat hybrid. The picture is here to show the melanistic black color. Photo by Joachim S. Müller. I am sorry that I don't have a picture of the Bagral cat - too rare.

Breeding from wild cats is problematic; the Savannah is a case in point. This is one reason why they are very expensive.

The Bagral cat or Machbagral cat breeding program is progressing slowly it seems (wrong - please tell me). This is because of the inherent difficulties of wild cat breeding (I presume) and F1 (first generation) cats are infertile (does that just apply to males or both females and males - I think it only applies to males?).

One last point. I think the name Bagral or Machbagral comes from an alternative name for the Fishing cat, which is also called the Bengali Mach-Bagral.(src: www.coolquiz.com)

Anonymous said…
I had a Bagrel cat for the 14 yrs of his life. He was 29lbs very close to the great. he had a long thick tail small ears with the false eyes on them marked like a fishing cat with black rosettes he was a one person cat like many wild Cat's loved to walk on a leash and would chase dogs and hiss at them. I'll send you a photo. Also he got along with my other cats he sprayed and was sterile, LOVED water and was very good at causing trouble. I loved him if dearly and missed him a lot.
9 July 2017 at 13:13

Michael Broad said…
Many thanks for the comment. Please send me the photo to:

Unknown said…
I have 2 cats, siblings that are according to the add on Kijiji Ragdoll & Machbagral mix. We were interested in the Ragdoll breed so we took them not knowing anything about the Machbagral. The male is a red Tabby and is huge at just over a year old with a large fluffy tail that he carries on his back when he walks. The female is half the size of her brother and is a gray with some peachy/white. Now I have no way of confirming for sure that they have some Machbagral in them nor does it really matter. Though it would be kinda neat if they did. Would you be able to tell if I sent you pic's of them?
25 September 2017 at 15:28