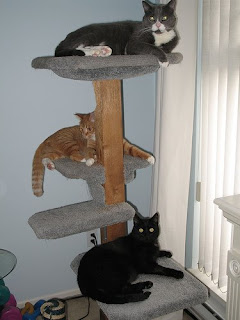 Sociable cats is an oxymoron some would say. In other words the cat is thought of as solitary and therefore cannot be a social creature living in harmony with other cats or pets. We think of the wild cats who prowl alone all their lives for example. We think of cats as only meeting up to have a fight.

Wild cats often don't have to be sociable cats as they have sufficient space to roam alone. This is a pet subject of mine as habitat destruction is seriously endangering a wide range of wildlife particularly the wild cats. See for example:

Cats, can be sociable cats are we know; they live with us fairly contentedly after all, seeing us overgrown giant mother and father cats rolled into one. The truth is, if cats need to be sociable they will be. They can change. Cats can be less selfish than we expect or are taught. Although generally cats avoid each other for territorial reasons (they even time share territory it seems), feral cat colonies are an example of cats getting along the benefit of all. This is in part due to the fact there is a space limitation in cities where feral cats congregate - they have to get on essentially.

Feral cats eat together if food is put down for them. I can recall an occasion in Italy where outside the hotel a feral cat colony lived in relative harmony. When it became cold in the evening one cat would lie on top of another cat. This kept both warmer. It is really about survival I think. If it improves life to be sociable cats, cats will be sociable.

One reason why domestic cats in homes get along better is because they are kept in a perpetual state of kittenhood as we feed and look after them all their lives. Kittens are mentally more able to get along with siblings and other cats.

This leads to the question, "are cats better alone or should we provide company in another cat". Often we are away from the home for long periods. Under these circumstances and bearing in mind what I have said above, my opinion, for what it is worth, is that we should bring another cat into the house to keep our cat company, but and this is a big but, it should be done slowly and with consideration for the cat who was there first as there is a territorial issue to deal with.

Cats like routine and time to change. The time frame to adapt to change of any sort is longer than we like to think. We like things to be instant but cats move at their own pace in order to become sociable cats.

Thanks to Desmond Morris for Cat Watching.

Photo header: published under creative commons license - Attribution-NonCommercial-NoDerivs License. The cat at the top is called Oscar, the cat at the bottom is called Mini Bear and the ginger in the middle comes from the neighbor to visit.
Email Post
Labels: Cat behavior