Feline allergies caused hair loss in this instance. The hair loss was also a result of alopecia (balding) Alopecia can be due to Feline Hyperesthesia. Photograph published under creative commons license. The cat is called Oreo and the photograph is by lil moe72

Cat allergies are relatively easy to understand. Allergic reactions affect humans as much as cats so we are probably all familiar with them one way of another. For example, not long ago I suffered from allergic contact dermatitis at the desk I was working at. A cleaner was using a spray polish which contained a chemical to which I was allergic. That chemical substance is called an "allergen". This resulted in a rash on the wrist area where I rested my arm. I had suffered an allergic reaction or a hypersensitivity reaction. In a variety of ways, the same thing affects cats.
An allergic reaction to an allergen is not confined to direct contact with the skin. Feline Allergies can be caused by allergens entering the body of the cat:-
Whereas human allergies usually take the form of hay fever and asthma (by allergens entering the lungs), feline allergies are usually concerned with the skin (e.g, flea bite allergy) and digestive tract (food allergies). A connection between humans and cats is in the form of an allergic reaction to a cat from cat dander (Fel d 1 (cat allergy))

So, what is happening? For me, at least, I'd like to know what is happening at a microscopic level. However, what actually happens is highly complex and not, as I understand, it completely researched and understood as at the date of this post. However, at a more simplistic level an allergen is not a parasite. It is does not benefit from its association with the cat or human (such as a worm). An allergen is an antigen and an antigen is a substance that generates an immune response. The immune system protects the body of animals from bacteria, viruses, foreign bodies etc. that can cause harm. Specifically allergens prompt the generation of antibodies. Antibodies are proteins in the blood and body fluids of an animal that identify and "neutralize" foreign objects as mentioned (e.g. viruses). Clearly in an allergic reaction the immune system is to a certain extent going wrong in reacting in a manner that causes the person or cat discomfort and illness.

Cats can become allergic to certain substances in food. Apparently the most common foods causing an allergic reaction are beef, chicken, pork, eggs, milk, fish, corn, wheat and soy. Well, I don't know when a cat would eat wheat (probably if she liked cereal and milk - some cats do). Actually now I think of it my cat likes to lick the bottom of the cereal bowl.

The symptoms of a food allergy are:
One treatment/diagnosis will be hypoallergenic cat food this link also looks at IBD - Irritable Bowl Disease. The bottom line and most obvious solution is a change in diet to remove the offending allergen. The problem is finding in which food the allergen exists. Hypoallergenic cat food helps in that process.

Buzzy has an allergy and is wearing a "lamp shade", I suppose to stop him scratching his head, where the symptoms are. He usually prefers to sleep outside under a hebe (a plant I believe found in New Zealand) - is the photographer and human companion a Kiwi? Photograph by riotcitygirl I hope you're alright now Buzzy. 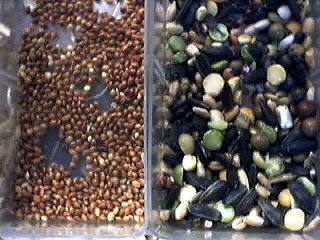 Miliary Dermatitis is an allergic skin reaction to a number of possible substances:

Of all the feline allergies it would seem that an allergic reaction to flea bites is the simplest to deal with. Even in the best households it is possible for a well kept cat to get fleas. But we owe it to our cat to check for fleas regularly. If this is done it is unlikely it seems to me that our cat will develop any of the rather severe symptoms associated with military dermatitis. The symptoms are:

It is relatively easy to check for fleas by combing with a flea comb. The flea(s) and a black granula substance will be combed out onto the teeth of the comb. If this accompanies the symptoms described it is likely that the dermatitis is due to a feline allergy to flea bites. I would have thought, though, as mentioned, that the state of affairs should not become so severe provided we are observant and proactive in dealing with fleas. There are many ways to deal with them. I personally favor simple combing (once combed out they should be crushed immediately as they jump off back to the cat) or if there are too many fleas a dropper treatment such as Frontline should control flea infestation.Cats can be given cortisone which treats the symptoms but can cause detrimental side effects. A "lamp shade" protector as above may be necessary.

Clearly a cat is relatively well protected by fur from coming into contact with chemicals that contain allergens to which the cat is sensitive. However, there are some areas where it can happen namely, the nose, paws, chin (thin hair), abdomen and groin (thinner hair). These areas point downwards and are generally nearest the ground so are in fact more likely to pick up irritant chemicals. Despite this the condition is rare.

Contact with the chemical gradually creates a sensitivity to it at which point the symptoms appear: inflammation of the skin as red itchy bumps, which can lead to hair loss and a crusty skin. Substances that can cause this feline allergy are: flea collar (the allergen is in the insecticide), flea powders (this is why I prefer the physical way, it's safer), some shampoos, some plants such as poison ivy, some fibers, plastics and rubber (this might lead to dermatitis in the tail and rear end of the cat due to the litter tray being made of these materials), dyes on materials such as carpet, drugs and medication.

Although the allergens are breathed in the symptoms are similar to allergic contact dermatitis and/or food allergies. There are many possible sources of allergens that can be inhaled namely, dust, pollens, molds, smoke, litter dust, carpet deodorizers etc. The rash can extend from around the head, neck and back.

In some cases an asthmatic attack can be triggered by inhaling allergens. Feline Asthma is also called Feline Allergic Bronchitis. Inhaling allergens can cause nasal allergies (allergic rhinitis) causing sneezing and watery discharge from the nose. Steroids and antihistamines are the treatment (but see a vet obviously).

The answer is the obvious; to isolate the cause, the allergen and remove it from the environment in which the cat lives while relieving symptoms (vet prescription). However, this shampoo Zymox Enzymaic Shampoo (12 Oz)

has received some glowing reviews by people who have struggled to cure skin infection problems. This might be an interim measure at least if the cause of the hair loss in uncertain, for example.