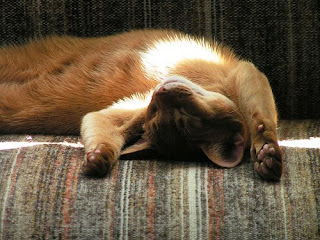 Anton says, I don't care what you call me - he's knackered - photo by isbye

The term "Ethiopian cat" is an old (outdated and unused I believe) name for the Abyssinian cat. This is interesting as Ethiopia is a more modern name for the country once referred to as Abyssinia (by people outside of Ethiopia and perhaps referring to an area). Although the name Ethiopia is, in fact, an ancient name.

So the cat fancy is working in the opposite direction to the rest of the world. Hardly interesting really now I think of it. One reason why this cat breed is called the Abyssinian rather than the Ethiopian cat is because it sounds better. Perhaps another better reason is because the name "Abyssinia" referred, as I understand it, to an area encompassing Ethiopia and this cat breed came from the wider area, so the name may be more accurate. 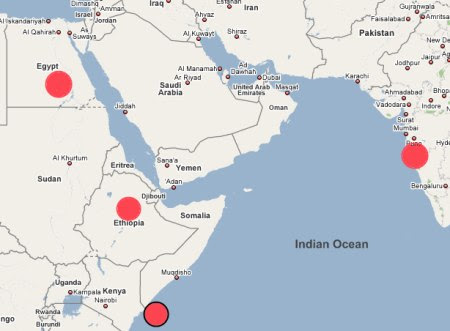 Apparently the Chinese used to call the Abyssinian cat the "Algerian cat" or the Ethiopian cat. Maybe they still do. Why, I wonder, call this cat breed the Algerian cat? Algeria is at least about 3,000 km to the left (north-west) of Ethiopia so is a considerable distance away from the mutually agreed source of this cat breed. Perhaps they have a different theory for the origins? Maybe they just prefer the name or maybe they got mixed up with the region or in translation.....?