This is probably a Bahrain feral, semi-feral or domestic cat but in comparing the description of this experimental cat breed with this cat there are distinct similarities.....read on please. Photo by greens n cornbread who says that the cats and dogs of Bahrain are best seen in the morning. This is probably for two reasons, one it is cooler at that time in a very hot country and secondly cats are crepuscular (go out at dawn and dusk to hunt). The photo is published under a creative commons license - Attribution-NonCommercial-ShareAlike License.

Update 25th March 2008: I am able to provide a substantial update to this post as since it was published Kathrin Stucki of A1 Savannahs has travelled to Bahrain and come back with video and still images of the tall, lean spotted street cat.  Using these images I produced this video:


Kathrin supports what a visitor said in the comments to this post that the Bahraini Dilmun is a wild cat hybrid. Bahrain is surrounded on both sides by countries where the serval and Jungle cat are found. Although a country made of 33 islands it is possible that domestic cats on the islands mated with these wild cats (the Jungle cat is particularly suitable as it is a similar size to the domestic cat and it was tamed into domestication thousands of yeas ago by the Egyptians).

Being an island a pool of founding hybrid cats could have produced this "breed" of wild cat hybrid over time. This is called the founder effect. The islands are relatively small. The Bahraini Dilmun would be a purebred cat without certificated in effect but this cat is now a recognised breed albeit extremely rare in a world wide sense and a new breed in the cat fancy.

This cat has evolved naturally, a precious process that can be easily destroyed by mating with domestic cats gradually diluting the purbred strain quickly. The Scottish Wild cat has or is suffering this fate it is thought.

And here are some quotes from Kathrin Stucki. Kathrin is an authority of wild cat hybrids in my opinion as she breeds the highest quality Savannah cats:


"The principle is sure the founder effect that I think happened on that island but is different in the way that, due to the crossing of several species the population started out with a much bigger gene pool. Different to other situations where a population of the same species is isolated and continues to evolve.
Knowing how fast the wild cat traits fade away by crossing out to regular domesticated cats, I’m afraid that it won’t be long before the Bahraini cats will lose their unique spotted coats and wild cat traits to become street cats that look no different to the ones we find all over the world"
"While I was there to visit a customer I couldn’t fail to notice the tall and lean spotted street cats. The wild looking cats with the tall ears and distinct ocelli immediately reminded me of my own Savannah cats. Most of the females that I’ve seen where about the same size and weight as our later generation Savannah cats but some of the Bahraini males seem to be quite taller and very lean in statute. Their spots are small and very nicely separated without any bars. The cats had an oriental like long body with a long tail, long legs and a long face but the coat was surprisingly short and coarse. Much shorter than the coat of an oriental cat and unlike any other cat coat I have touched before."
"Although timid, the street cats have quickly gained trust after I fed them several days at the same place. I observed a litter of approximately 6 week old babies that were born to a brown spotted tabby mother and what the residents believed to be the father was a huge black leggy cat with a very exotic appearance but without spots. The babies where all spotted and had big upright ears, distinct ocelli and the typical Serval hybrid appearance. They looked so much like little good quality Savannah kittens..."

See the above picture plus some more info.


What follows was written before receiving the material from Kathrin:

The Bahraini Dilmun Cat is a natural cat of Bahrain. This means that the cat evolved naturally, which further implies that the cat was and probably still is a feral cat and a household pet as well as an experimental cat breed being developed by the Cat Club of Bahrain.

All cat breeds ultimately come from feral cats, which in turn come from the wildcat. The classic semi-feral cat turned fantastic domestic purebred cat is the barn cat, the Maine Coon cat. My suggestion is that this cat breed is another example albeit more recent. The Arabian Mau is another feral cat that is currently being turned into a purebred cat.

The Bahraini Dilmun Cat is semi-foreign is terms of shape (meaning more slender than say an American Shorthair or British Shorthair). The cat in the picture fits the bill (unless someone wants to correct me for which I'll be grateful and not in any way upset).

Next, this experimental cat breed has soft fur, long legs and a narrow tail. The head is wedge shaped (all regular cats have wedge shaped heads, the Persian cat head is rounded). The coat is a spotted tabby as a result the legs and tail are banded. The eyes are green or gold. The nose has a "dusky blush" and this is apparent I believe in both the pictures illustrating this post.

The Egyptian Mau, another naturally spotted cat, is both a brilliant purebred cat in America and a persecuted feral cat in Egypt and looks very similar in feral cat conformation to this cat breed. As a purebred cat the pattern (the spots) are made to stand out more through greater contrast with the background. This is achieved by selective breeding. In a natural form the spotted pattern is veiled by lower contrast in part because the background is darker and in part because the spots are lighter and ticked (see tabby cat coats).

Well, as I said the written description fits the cats illustrated, very well in my opinion. Here is another Bahraini cat, not a Dilmun cat as far as I know but one that nonetheless, at least to a substantial degree, fits the bill. 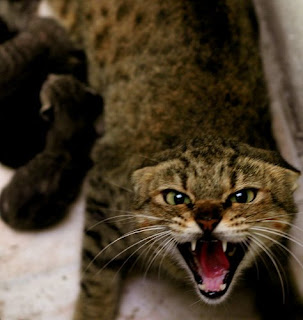 Great picture - mother protecting her young - photo of a cat in Bahrain by Hussain Isa. This cat has similar tabby spots and that dusky nose again.

One last thing, what does the word "Dilmun" mean? It is an ancient name describing an area that is around and beyond the island of Bahrain.