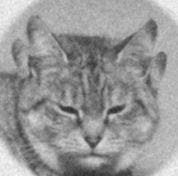 I don't think we should devote much time to a cat with four ears because it is simply an anatomical abnormality. Another one is cats with more than the usual number of toes - see American Polydactyl cat. Humans can be polydactyl too. Humans can also have less than the usual number of toes or fingers. This is called split foot - see CHARGE syndrome, split foot and cats. A more technical name for split foot is Syndactyly.

Humans can also have 4 nipples and so on and so on. I know people are sometimes interested in this kind of thing but I think it is more the media than the people. Not many people search the Internet for a cat with four ears compared with American Shorthair cat for example.

The extra ear flaps or pinnae of a cat with four ears is not a functional piece of anatomy, it seems. In the case of YODA, the 2 extra flaps (in fact it was 4 extra flaps in my opinion as I think Yoda had 6 ears) were not attached to the skull. In other words there were no extra ear canals as well. They were vestigial extra flaps no more - cosmetic defects or perhaps not a defect at all as he became very well known because of them. Yoda was picked up in a bar in the US. Kittens apparently were being handed around to poeple who might like one. That doesn't sound that great. Yoda is microchipped as he might be stolen due to his celebrity. I can't publish a picture of Yoda, the cat with four ears because the photographer sold the rights to an agency and I think they will charge for the right to publish and it is not worth paying for that right.

In the case of Yoda it seems that his extra ear flaps pushed his functional ear flaps lower down the head as they look a little out of place. This doesn't seem to have had effect on his hearing.

Cat with four ears to home page
By Michael Broad at September 30, 2008