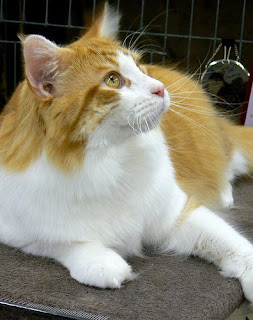 The American Forest Cat Longhair is another name for the Maine Coon cat (src: Sarah Hartwell). There is not much to say about that except the name seems to be rarely used and it creates a confusion particularly to people outside the cat fancy. The Maine coon cat is similar to the Norwegian Forest cat in appearance which adds to the confusion.

The picture heading this post is of a Maine Coon at a cat show, so this is a seriously nice cat. This one is a ginger tabby and white (in my opinion - see cat coats tabby and white). The photo is published under a creative commons license; Attribution-NonCommercial-NoDerivs License. The same applies to the photo published below. 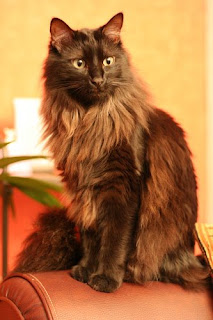 Norwegian Forest Cat - photo by KouK's -this shows the similarity. The head shape for one is slightly different and the American Forest Cat Longhair is generally heavier (see largest domestic cat breed).