The Anatolian cat is a bit of a mystery cat. This is apparently an experimental breed and is also called the Turkish Shorthair or Anadolu Kedisi.

However, the breed is apparently accepted by one cat association, the World Cat Federation (WCF). The German based (.de) WCF website's link to their pages in English is broken at the date of this post so I couldn't easily discover more about the Anatolian from their website but another search produced a website for the WCF Russian Office and they had breed standards for all the accepted cats by the federation including the Anatoli ANA. Is this the same breed as the Anatolian? The letters "ANA" is the federation's code for this breed. If it is the cat breed it is not experimental it would seem, not as regards the WCF anyway, as there is no mention of the breed being experimental on their website. 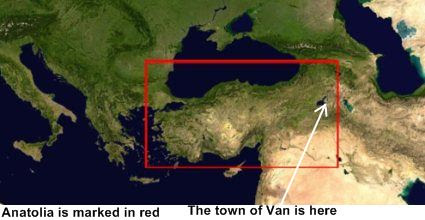 {This file is in the public domain because it was created by NASA. It has been modified by en:User:Denizz (drawn a rectangle around Anatolia) and by me (cropped the image to fit this page)}

Anatolia, incidentally, is an area that encompasses most of Turkey and is an ancient term defining a certain region. This informs us about the connection between Turkey, the Turkish Van and the Anatoli or Anatolian cat.

For that reason it would seem that the Anatolian is the Turkish Van or a very similar breed. On that basis I am not going to go into great detail about the cat here but respectfully point you, if I may in the direction of the Turkish Van page of the Pictures of cats website. The major feature other than the long and natural history is the short coat that has no undercoat (easy to maintain - less matting) and the cat's likeness for playing in water or even swimming in it and of course the famous Van pattern.

Anatolian cat to Home page
By Michael Broad at September 06, 2008