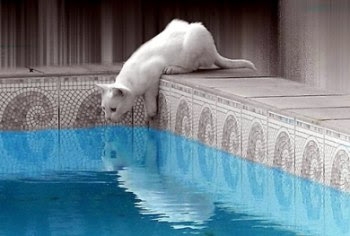 Cats and Water - by Tempo no tempo (No Video)

This fine picture prompted me to address the question as to whether cats really don't like water as has generally been (or still is) the view.

The more you think about it, the less true it seems. When do people use water or play in water? Not many actually go swimming, probably a very low percentage of the entire population so it can't be said that humans like water particularly. We run out of rain for instance, while most cats, certainly feral cats, tolerate rain better than humans.

We use water to wash, that is our main connection with water other than drinking it in various forms. Cats don't need to use water to wash so one can't criticize them for not liking water for that purpose. 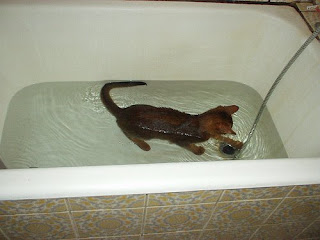 Abyssinian cat in water - cats and water mixing nicely - Abys are lively cats but not as far as I am aware particular attracted to water but this one is. The point is that some cats, as is the case for some individual people, like water and some don't. It cuts across cat breeds. Photograph by isbye

A number of cats actually like water, particularly the wildcat hybrids, such as the Bengal cat and Savannahs. A natural cat of Turkey the Turkish Van sometimes goes for swims in it. Cats and water aren't necessarily polar opposites.

A lot of wild cats live by and paddle and even swim in water as it is a good source of food. One wild cat the Asian Fishing cat is a particularly good fisher but there are others. The Asian Leopard cat likes to live near water for fish and other animals living on or near it.

There is a picture of a White Siberian tiger swimming under water; now he likes the stuff that's for sure.

My cat, a moggie tuxedo cat doesn't particularly like it but goes out in it without an umbrella or overcoat!! So, I can't say that she is that averse to water. However, one thing that may make a cat a little reluctant to get wet is the fact that she will need to re-groom her fur afterwards. It may be a laziness thing, not wanting to have to groom again having got wet.

No, I am convinced on reflection that the idea that cats don't like water is exactly accurate, it's a misconception, some do and some don't just like humans. Cats and water can go together.

Cats and Water to Turkish Van the water loving cat