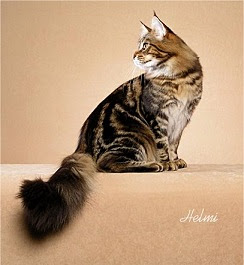 Classic brown tabby pattern but as you guessed the cat is not a Classicat nor an Ocicat. The picture is simply to show the classic tabby pattern. - photo copyright Helmi Flick

I also discuss in some detail the Ocicat - Ocicat.

The Ocicat is a fine looking cat, which could be described as an exotic cat owing to the similarity with small wild cats but is not a wildcat hybrid. Neither is the Classicat, which has been fully developed from domestic cats. This is the breeding diagrammatically:-

The Classicat is a New Zealand breed; it seems that the breed is currently exclusively bred in New Zealand.

The Classicat will be athletic and a good size with a sleak coat. Another name for the Classicat is the Jungala (Sanskrit for the word "jungle"). The Classicat is a medium to large cat of moderate type, meaning nothing extreme in terms of conformation. The conformation (shape) and character are the same as the Ocicat and as stated the only difference is the coat pattern.

Classicat to Ocicat
By Michael Broad at September 09, 2008