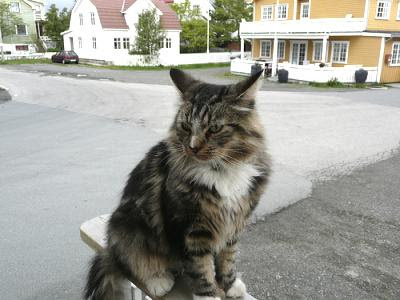 American Longhair is another now unused name for the Maine Coon cat. It is (or was) also the name for a proposed or actual long haired American Shorthair, if that makes sense.

I say unused but maybe some people still use it. One person has written about the American Longhair as if it is a current breed of American cat. They don't refer to the Maine Coon when doing so - strange because there is no such breed of cat. There are cat breeds in America that have long hair but the characteristic of long hair cuts across breeds and is not confined to a single breed.

The range of coat types allowable under the various breed standards is wide but the most popular is the classic tabby (takes you to a detailed post on the tabby coat) which is blotches as opposed to spotted tabby. Tabby and white looks fantastic too.

American Longhair - About the photo: I like it as this is the home of the Norwegian Forest cat, a similar cat and one possibly with the same origin. Also this Maine Coon cat is so typically a Maine Coon with a nice tabby coat and a splash of white, which is nice and symmetrical on the nose. Published under a creative commons license - Attribution License.