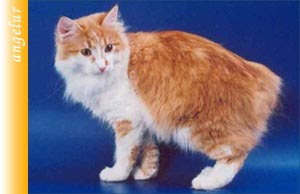 Karelian Bobtail cat - this picture comes from the cat breeder Angelur (located in Moscow, Russia, I believe). I am giving a link in exchange for use of the photograph. This particular cat looks like a tabby and white.

Other names for the Karelian Bobtail are, Karel Bobtail, Karelian or Karellian. This is a natural cat in that the mutation that gives this cat breed the bob tail occurred naturally. The same applies for the Kurilian Bobtail cat, whose place of origin is, in fact, on the other side of Russia near Japan (the Kuril Islands). 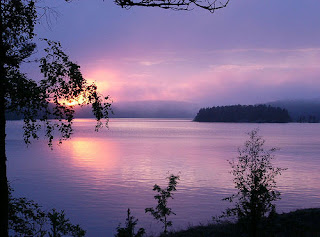 The place of origin of the Karelian Bobtail cat - Lake Ladoga - Russia - Republic of Karelia in northwestern Russia, fairly close to Saint Petersburg. This is the area of origin it is said of this cat breed. Another bobtailed Russian cat that occurred naturally is the Kurilian Bobtail, a similar name, interestingly. This photo is by _val_

--- see map below for location. 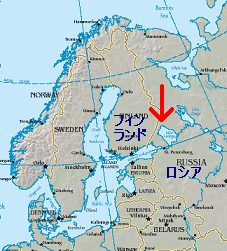 This shows the map of Russia where Lake Lagoda is situated - published under a Wikimedia commons license.

This rare cat breed can either have short or semi-long hair (but see below). The cat is registered by the World Cat Federation (WCF). Their breed standard states the following:

The WCF breed standard for the Karelian Bobtail states that the hair is short and very dense (this presumably is a reference to the warmth of the coat bearing in mind the area from which this cat originates). The breed is medium sized with a tail that can be between 4 to 13 centimeters long. The tail is kinked or curved and the hair longer on the tail to create the pom pom appearance.

The face of the Karelian Bobtail is an equilateral triangle in shape meaning the sides and top of the head form a triangle with equal length of sides (see Japanese Bobtail breed standard page, which has exactly the same breed standard regarding head shape - you'll see a diagram). The Kurilain Bobtail has a head that is described in even more technical terms as being a trapesium (see a diagram and a perfect example of the Kurilian Bobtail trapesium head shape).

A wide range of coat colors are allowed under the breed standard except: cinnamon, lilac, chocolate, fawn and pointed.

A Russian breeder (Angelur - see link to cattery website above) of this cat says that the breed is vanishing and asks anyone for a Karelian Bobtail. I said this was a rare cat breed.