Photo above published under a Wikimedia® Commons license.

This is one of the Rex cat breeds, which are curly haired cats (see cat coats curly). The other well known, in fact better known, curly haired cat breeds are the Cornish Rex, Devon Rex and the LaPerm. Curly haired cats arrived out of a genetic mutation and were discovered and then bred to create a cat breed. At the time of discovery these cats were household pets or semi-feral cats. Until the formation of the cat fancy in the late 1800s cats were not formally differentiated into cat breeds.

These are the dates on the origins of the Rex cats:

We can see therefore that the interest in cat breeds that I refer to above was evident during the 1950s onwards. The most prolific time for the creation of cat breeds was the period 1950-60 and 1980 - see cat history time line. The German Rex cat breed started during this active period in the cat fancy. Perhaps it was almost fashionable (this is not a criticism in any way) to develop a new continental curly coated cat breed at that time. 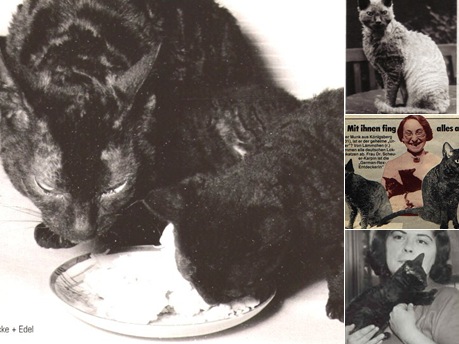 The date of origin is probably best described as being in 1951 when a certain hospital doctor named Dr Rose Scheuer-Karpin discovered a curly haired cat in the hospital grounds. The hospital was and probably still is in the Pankow borough of Berlin - see green area in map below (see base of post for copyright rights etc. on photos):


The black curly haired cat seen by Dr. Scheuer-Karpin was known to staff at the clinic from about 1947. Some 20 years earlier in Königsberg (Eastern Germany I believe) another curly haired cat was "discovered". He was named Munck and his owner (keeper) treated Munk as a pet and thought nothing of it. In the 1930s the cat fancy was at a fairly early stage and very few if any new breeds created. The Persian appearance was beginning to be changed in America by my reckoning at about this time (some people will disagree with this) - see Persian cats.

Anyway, I think it a fair assessment to say that the German Rex cat started life as a cat breed in about 1951 with the doctor. Here she is:


This above image comes from Wikipedia® User:Tamstudi (see license below), who is a member of the German Rex Cat Club. On the left is apparently the earlier discovered cat Munk and on the right the German Rex cat to be, named Lämmchen by the doctor. This is obviously a montage and the fact that a picture of Munk is featured indicates that a connection was made between these cats and that Munk was known despite being treated as no more than a pet. The connection may be more profound in that Munk could have been the great grandfather of Lämmchen.

I think this a little unlikely considering the distance between the two and the fact that incidences of the recessive gene showing in cats although rare was not and is not that exceptional. Although as the Wikipedia author says a the time after WW2 there was a lot of people displacement and Munk could have been brought with the person keeping the cat when travelling west.

The first time I saw these German Rex cats, I thought they looked pretty solid, stocky cats and not at all like the American Cornish Rex, which is noticeable slender or the pixie faced and rather delicate Devon Rex bred in the USA. Both Munk and Lämmchen are both originals as is Kallibunker the founding Cornish Rex (see what I believe to be his photograph on the right here).

Both the German Rexes are slightly bulkier cats it seems, while the founding Cornish Rex is lean and athletic. I suppose this is simply chance in that the gene responsible for the curly hair happened to find itself in a bulkier or lighter cat; in other words, the conformation (overall body shape) is not linked to the curly hair.

Moving on - what happened after the doctor found Lämmchen? Lämmchen was a female. The doctor I am going to presume was a cat breeder of sorts (perhaps well-established I don't know) as she progressed the breed (somewhat but a little haphazardly - see below) and considered that Lämmchen's coat was a result of a genetic mutation, which was correct. I don't know if Dr. Scheuer-Karpin considered whether the mutation was the same as that in the Cornish Rex. Lämmchen became the founding female cat of all German Rex cats.

There would seem to have been "uncontrolled" breeding by Lämmchen after the doctor found her, which does not seem very much like a cat breeder. Of course, Lämmchen would or could have produced offspring before 1951 and so there are probably curly haired cats living in Berlin to this day, undiscovered or unnoticed whose great grandmother is Lämmchen.

Anyway, the breed got off the ground although at one stage only 3 descendants of Lämmchen existed. The early progression of the German Rex cat breed depended on breeders in Grund (Barensfeld family).

It would seem that over the intervening years the development of the German Rex breed faltered on occasions but survived at a somewhat low level. The German Rex cat is now recognized by the World Cat Federation (WCF) and Federation International Feline (FIFe) and has been exported to the USA.

Photo above of "Alana" who has the dearest of faces - photo by M.Gerver.

The breed standard is taken from FIFe and this is a very brief overview of the modern day requirements for this breed of cat.

This is clearly still a medium build cat of moderate type, which indicates that the original conformation has been preserved (c.f. the American Cornish Rex). The head should be rounded and the whiskers short and curly. The body should be medium in length.

The ears should be medium large. There would seem to be no restriction on coat color and pattern. This cat is all about the curly hair.

The guard and awn hairs of a cat are the top coat. The down hairs are the undercoat. The down hairs are the thinnest and feel softer. The Rex coat is typically soft and it was thought that this was because the top coat has been removed by this genetic mutation. This is incorrect it seems. The hair fibers are in fact reduced in thickness and length. The guard and awn hairs are affected the most. This gives the soft texture. The German Rex cat has more awn hairs than in the other Rex cats. The difference in thickness between the awn hairs and the down hairs is more marked in the German Rex cat. There seems to be no guard hairs, however. The whiskers are bent.

The German Rex coat is typical of the Rex cats, smooth, soft and wavy. As I may have mentioned above the gene that produces the curly coat is autosomal recessive.

Dr. Desmond Morris is a famous zoologist, naturalist and author. He has written about the German Rex in his book Cat World. He states that it was discovered in 1946 but some authors say 1947 or 1948. The discovery took place in East Germany. The breed was taken up by serious breeders in 1951 following the discovery of the Cornish Rex cat in England in 1950.
The coat is very similar to that of the Cornish Rex. There are no guard hairs and the awn hairs and undercoat are both very short. The awn hairs of the German Rex are a little thicker than the Cornish Rex which gives the coat a thickness and a fullness not apparent on the Cornish Rex.
The first German Rex was a black female feral cat. She was wandering around in the gardens of Hufeland Hospital in the ruins of East Berlin. The date? Shortly after the end of World War II. She was rescued by Dr. R Scheuer-Karpin. The doctor named her Lambkin in English. In German it is "Lammchen". The cat carried the same wavy-haired Jean as the Cornish Rex cats.
Lambkin had many litters. When she was 10, in 1957, she was mated with one of her sons. This produced a litter of Rex kittens. Two female German Rex cats were born in 1960 called Marigold and Jet. They were taken to the United States for breeding purposes.
In 1961 a black male German Rex called Christopher Columbus followed them to the states. These three cats in conjunction with Cornish Rex cats already imported formed the basis of the Rex breed in America.

Sources - although these are the sources they may all originate in the same source and one them could be that original source except the italicized one as that is my website:
German Rex Cat - Photos: header, second down (map) and third down (Dr. Dr. Scheuer-Karpin) - published under Wikimedia® commons (license: Wikimedia® creative commons license license = Attribution-ShareAlike License). Alana - Wikipedia® commons. Kallibunker photo in the public domain.