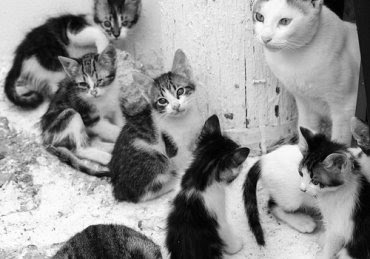 The Aegean cat is a bit of a mystery cat and the Greek cat fancy is equally mysterious but they have ostensibly been developing a cat breed called the Aegean cat since the early 1990s. It is surprising in the modern world that someone in the Greek Fancy hasn't got a website. Is there a Greek cat association? The strong indication is that there isn't. I don't think that the Greeks are into that kind of thing. I sense that for them the cat is a domestic cat or stray cat (and there would seem to be a lot) and the concept of a purebred cat is a little alien.

I think it fair to say that this cat breed's development is firmly in the embryonic stage rather than in its infancy. How else can we explain neither pictures nor words about the cat other than Sarah Hartwell's at Messybeast and copies?

The Aegean cat if we see one would be a fairly normal looking cat and possibly a bicolor with plenty of white (see solid and white coats). They might look a bit like the cats in the picture above in fact. These are mixed breed cats from the place of origin of the Aegean cat (in this instance an island called Mykonos, part of the Cycladic islands).

If this cat breed actually exists beyond the drawing board it must be one of the rare cat breeds.

Anonymous said…
yeah, i think you're right these what you call Aegean cats must be considered as one of the domestic cats. i extremely love cats than dogs. you know why because dogs , i think are of no use, they just bark, unlike cats they catch mouses. i'm not ashamed to say that i own an AEGEAN CAT.
13 June 2009 at 19:29

Anonymous said…
haha i never thought that all the cats i see around are pure aegean breed. we always tend to think that all stray cats are like that.. i dunno i think in turkey they have the same cats..*looking throughout the web to find a picture of a pure breed aegean*
13 September 2010 at 10:28

Anonymous said…
I moved to Athens in 2012 and I live in a pretty quaint area in Northern Athens called Nea Erythrea. I have seen some of the most beautiful cats roaming free with all white bodies and grey or black tails. One in particular was all white with a fluffy grey tail he looked like a racoon. Also I saw a tortoiseshell/calico cat here with blue eyes! Isn't that quite rare for tortoiseshell cats? Some of the mutations here are beautiful and I would say rare as I don't see them in London or anywhere else really.
24 February 2014 at 00:53

Michael Broad said…
I agree that the cats are special. They do have an appearance that cats in the UK and USA don't have. I'd love you to photograph them and visit the main site:

and write a comment with uploaded pictures, which I would convert to an article.

Anonymous said…
Hi just saw your post. I have a few pic's that I could post at: http://pictures-of-cats.org/
if you like. Though you must realise that these cats look quite spectacular in reality and pictures don't always do them Justice but I will post at a later date.
22 October 2014 at 04:43