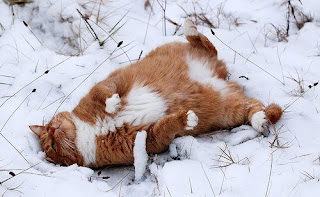 Not the Alaskan Snow Cat - no - but a cat in the snow enjoying himself - this is the nearest I can get (except for the Somali cat below) to a picture of the Snow Cat. Photo by ~Jetta Girl~ His name is Sonny.

The Alaskan Snow cat is an experimental cat breed, we are told. The other name for this proposed breed of purebred cat is the Snow cat. I cannot find a picture so I decided to have some fun instead. 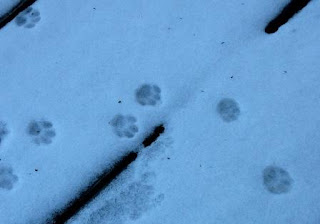 Are these the pawprints of a Snow cat>>>>?

We shouldn't get this cat breed mixed up with another cat breed whose name is also associated with the snow because of the color of the fur, namely the Snowshoe cat, which is a fully registered and recognized cat breed: see the Snowshoe cat.

The Snow cat is a cross between a Silver Persian and a Somali. The Somali is an Abyssinian cat with long hair. see the Somali cat. Persian cats are either bred to an extremely flat face (the Persian that competes at cat shows) or are a Traditional Doll Face Persian (click here too see a fantastic white Doll Face Persian called Yeri). People prefer the traditional look as far as I can tell or at least the poll on this page says that.

An example of a Silver Persian cat of the traditional kind can be seen here: Chinchilla Persian cat. We know what the parents of the Alaskan Snow cat might look like (if you've clicked on the links), so we might be able to guess what this experimental breed might look like. The target is a Somali type cat with the heavy (the CFA Persian breed standard calls it "massive") rounded head and heavier bones of the Ultra Persian.

Is there anyone out there who has bred an Alaskan Snow Cat? If so please post a picture by filling in the form on this page:- Have a Say - it would be great. 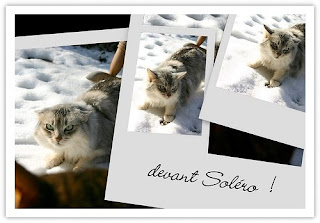 Photo montage of a Silver Somali in the snow
am I correct? Nearest I can get
- photo by couleurs gm
Alaskan Snow cat to Home page

Photo of paw prints in the cool blue snow: Photo by by lndhslf72 and published under a creative commons license = Attribution-NonCommercial-NoDerivs License. The header photo and the montage are published under the same license.
Email Post
Labels: cat breeds