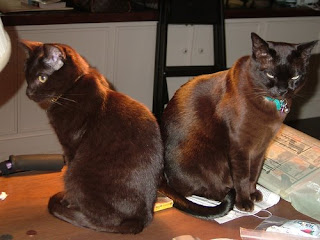 The name Chestnut Brown cat was formally used on the 15th November 1958 at the Croydon Cat Club's Annual Championship Show as a new name for the then "Havana" cat. Up until then the Havana had been registered under "any other variety". The Havana is referred to as the Havana Brown today by the CFA.

The change came about because of expected misunderstandings with rabbit breeders (who I shall presume had rabbits called Havanas and probably still do).

The show was held at the Central Hall, Westminster, London. This is in the heart of London not far for the Houses of Parliament. Seven Chestnut Browns were entered for competition. The winner of the adult and kitten class in this show were exhibited by Mrs I Monro-Smith of Reading. (Reading is west of London)

It is thought that the first brown cats in the UK originated by accident in a cross breeding perhaps in a desire to breed a different kind of cat. This happened in the creation of the Ocicat for example (also called the Accicat - accidental cat for that reason).

When this distinctly brown cat cat was first shown in England this cat was it seems given the name "Swiss Mountain Cat", then "Havana" after the cigars and as stated at the above cat show the name changed again to Chestnut Brown.

The GCCF lists the name of this breed as "Havana breed No. 29" on its website at the date of this posting, so it seems that is was decided that the name was not confusing after all and the name has gone full circle.