Giving Glucosamine to a cat

Giving Glucosamine to a cat is, it seems, acceptable in the treatment of osteoarthritis, a condition from which older cats can suffer. 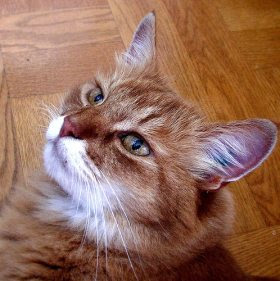 Somali cat - photo by Per Ola Wiberg (former ponanwi and Powi) - this cat is not arthritic nor it seems old! Just a good photograph of fine looking cat to illustrate the page. His name is Vincent.

Glucosamine is a well known, popular and well promoted alternative medicine for the treatment of osteoarthritis in older people. It is almost seen as some kind of miracle cure, a life improver. So, this is a testament to the fact that cats and humans have a similar anatomy and in some cases a similar treatment for illness. Although giving pain relief to cats without veterinarian advice would be very foolhardy indeed (see feline pain relief).

Glucosamine is an amino sugar and a precursor in the synthesis of certain types of protein and lipids including "glycosaminoglycans". These substances are a component of joint cartilage. And osteoarthritis is caused by the breakdown of the cartilage. This allows the joints to rub together, which in turn causes painful inflammation.

So, the theory is that Glucosamine will help in the repair of the cartilage and ease the inflammation and get the joint working again. This is better, it is argued, than simply administering anti-inflammatory drugs. In any case drug treatment in cats particularly aspirin (an anti-inflammatory and pain killer) requires extreme care. Giving Glucosamine to a cat is, on the face of it, a better treatment.

It is slow acting (2 months estimate and more I expect) as it is repairing the cartilage, a natural process and these commonly take longer than one expects.

It is recommended that high quality products be bought, if one buys at all, to maximize the prospect of successful treatment. It probably goes without saying, but I'll say it anyway, that a veterinarian needs to be involved before going ahead with giving Glucosamine to a cat.

Giving Glucosamine to a cat to Cat health problems

Giving Glucosamine to a cat - photo: published under a creative commons license - Attribution-NonCommercial-NoDerivs License
By Michael Broad at September 26, 2008