The Alpine Lynx is a supposed wildcat/domestic cat hybrid. As far as I am aware this cat is not registered with any cat registries and therefore it is probably right to say that this is not a cat breed in the strict sense but simply a hybrid cat that could become a cat breed. If anyone wants to correct me that's fine, please leave a brief comment. I am grateful to Will Hayes for kindly agreeing to allow to publish two of his photographs of this cat breed.

The Highland Lynx is also a wildcat/domestic cat hybrid, which you can read abou 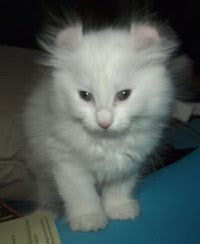 t here in relation to the breed's contribution to the creation of another cat breed, the Highlander cat. The Highland Lynx carries the dominant mutated gene that produces curled ears. It is the same gene that produces the curled ears of the American Curl. For this reason the Alpine Lynx also has curled ears (and also straight ears). This cat breed also has a short or absent tail, possibly polydactyl toes (more than the average number of toes - See American Polydactyl cat), and is bigger than usual.

A question that raises its head is, is there such a cat as a white American Bobcat? Bobcats have tabby coats, the perfect camouflage for a wildcat. White coats are bad news for wildcats unless they live permanently above the snow line and none do as far as I am aware. Nothing jumps off the page on an Internet search. Tests don't confirm that the Alpine Lynx is a wildcat hybrid.

Photos of the Alpine Lynx heading the post and bottom right are by Will Hayes and are copyright Will Hayes. Will bred these cats as well.