In the UK, according to the Daily Star, we have an unknown cat expert who wants to become an recognised feline behaviourist with his own television show just like Jackson Galaxy in the USA. His name is Louis Denver, 29, and I have a feeling he has been watching Jackson Galaxy in action on his website. 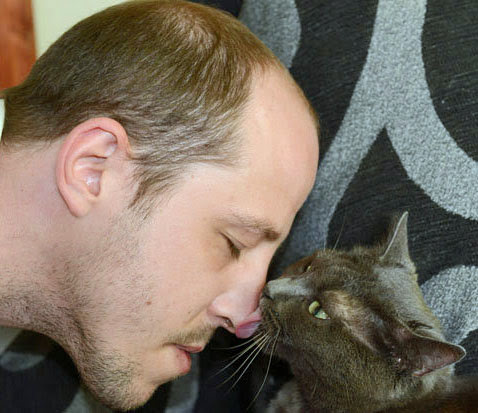 He calls himself a “cat man" and says that he has built up his skills as a cat psychologist over time.  He lives in the north of the country in Lytham St Anne's, Lancashire.

Regrettably, he says things which tell me that he does not know enough about cats to be the UK's version of Jackson Galaxy.

Louis says the main problems facing cat owners are inappropriate elimination, loud meowing at night and spraying around the house. These are not the main problems.  Very few domestic cats spray around the house because spraying, as I'm sure Louis knows, is a form of territorial marking but although some rarely do this, 95% of domestic cats don't, especially if they are neutered.

Also, meowing at night is not in my mind a major problem.  You can see a list of the reasons for cat relinquishment on this page and they tell us what the major reasons are for a breakdown in the relationship between person and cat.

Louis says if a domestic cat misses the litter tray it is because the cat is territorially insecure and keen to mark his territory. Marking territory through spraying horizontally is not the same as peeing into a litter tray. The reasons behind both actions are completely different and unrelated.  You can read about how to stop peeing outside the box on this page.

Louis also states that cats try to be naughty. I would certainly dispute that especially as he implies that it is the reason for not using the litter tray which is completely incorrect in my opinion.

Louis claims to have learned everything he knows about cats from TV programmes and online tutorials. With respect to Louis, you cannot substitute actual cat caretaking over a long period of time with YouTube videos. To learn about cat behaviour solely from the Internet from words written and videos made is not enough.

He does have a good point when he says that cat caretakers need to play with their cats more often. And he doesn't like the mistreatment of cats which obviously tells us that his heart is in the right place.

I am not sure that the actually cares for a cat. That has not been stated in the article in the Daily Star.