The Passenger Pigeon: A message to domestic cat critics

In the 19th century the raucous passenger pigeon was the world's most common bird. It swarmed in hundreds of millions over the eastern half of North America journeying from one forest to another in search of nuts, its main source of food.

One colony was 20 miles long and 5 miles wide. Other reports talk of columns of birds up to 3 miles wide; the birds tightly packed flying overhead for hour after hour.  The ornithologist, John James Audubon, recounted in 1810 walking in Kentucky with a never-ending stream of passenger pigeons flying past him for 3 successive days.  A modern estimate puts the colony of birds that he saw at 1,100,000,000 (1.1 billion) birds.  Other flocks of passenger pigeons may have numbered 2 to 3 billion.  The entire population at peak was estimated at about 10,000,000,000. 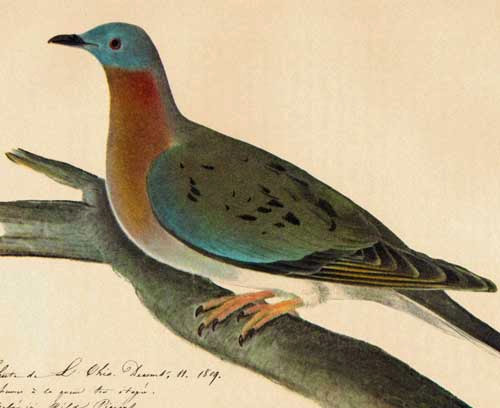 In the 1880s there was still mass nestings of the passenger pigeon. Yet two decades later this most common birds was extinct. The last of the species was a captive female called Martha who died sometime between midday and 1 pm on September 1, 1914 in Cincinnati zoo.

Mark Avery, the author of a fascinating book entitled: A Message from Martha -The Extinction of the Passenger Pigeon and its Relevance Today, has decided that the reason for this bird's rapid decline to extinction was a combination of industrial slaughter through sport hunting combined with another well-known form of human activity namely “progress", which in this instance refers to the rapid spread West in the 19th century of American colonists who cut down forests with such gusto that by 1872 some 52% of trees in eastern America had gone. These trees were mostly mature ones that provided the bird's main source of food. In modern parlance this is "loss of habitat". Both hunting in the form of poaching and habitat loss are very relevant today with respect to human threats to the wild cat species.

What has this got to do with cats?  Frequently on this website and on the Internet generally, we see criticism from people who dislike the domestic, stray and feral cat. They constantly state that bird populations are in decline because of predation by the cat.

In defence of the cat, I always state that human behaviour is far more dangerous to bird populations and has had a far greater impact upon their population sizes. The story of the passenger pigeon in North America illustrates my argument and I hope that it drives home the point that ornithologists and cat haters should please reconsider what they wish to say when they criticise the domestic cat.