This is a peculiar photo of a jihandist and an orange and white community cat. 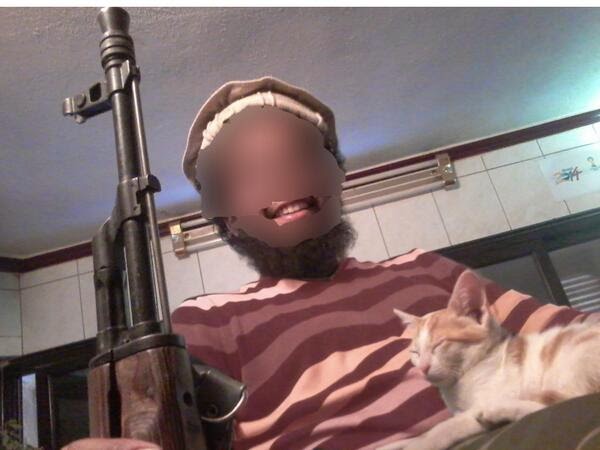 Jihadists are people engaged in armed jihad. They are people described as terrorists. This photo was, I believe, posted on Twitter by ISIS, the new, very large group of Muslim terrorists who have invaded Iraq and who have carved out a new Islamic state led by a supreme religious and political leader from inside Iraq (a "caliphate") - they claim.

The word "jihad" has been hijacked by Islamic terrorists because it is meant to mean "to struggle in the way of Allah" which is to do good, as I understand it.

The breeding ground for these jihadists is Syria. Syria has been neglected by the West and they are paying the price.

The photo is part of the relatively sophisticated media campaign waged by ISIS on Twitter and other social media sites to promote their cause and recruit "troops".

The caption for the photo is:

BTW This bro dint want his wife to know that hes here,so just saved his smile aftr the edits=D"

Make of it what you will. We know how news media promote their newspapers with cat stories; this looks like a ISIS promo type image projecting a softer image.
Email Post
Labels: community cat Muslims