Have you noticed that rather strange secondary ear flap attached to the main ear flap (the bit you see) in your cat? If you look carefully you see what is described as a "pouch" or "pocket" at the lower part of the ear flap (scientific name: pinna). The photo shows it: 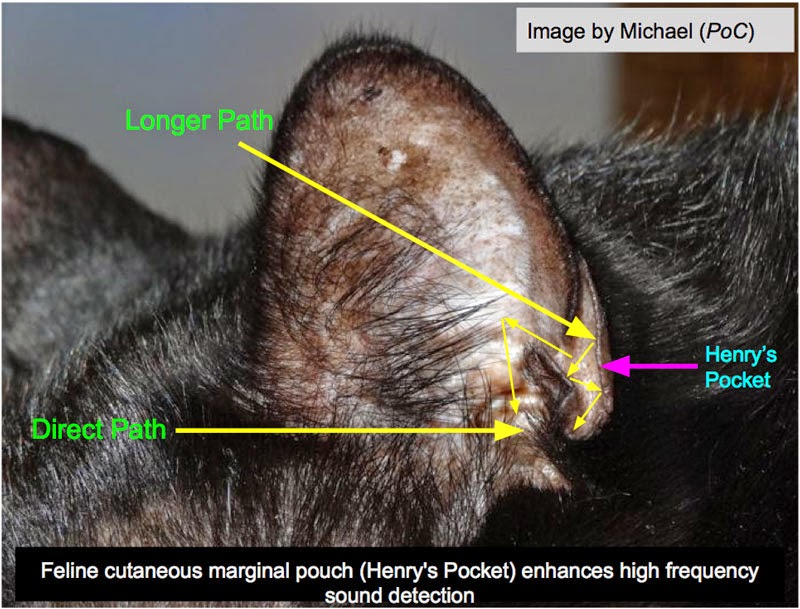 Everyone says that this pouch or pocket serves no purpose. I disagree - but cautiously - because I am not sure. However, it is a part of the anatomy of a cat's ear and nature wouldn't have allowed it to evolve without a reason, I believe.

All evolution is about survival. I therefore concluded that Henry's Pocket or the "feline cutaneous marginal pouch" (as it is scientifically referred to) exists to enhance hearing of high frequency sound produced by its primary prey: the mouse.

The only reason for enhancing hearing is to improve the chances of survival which can be translated into improving the chances of catching prey. Domestic cats are wild at heart.

Therefore having researched "pinna notch" I concluded its presence was a modification of that. What is pinna notch?

It is the inference and consequential reduction in strength of sound waves of a certain frequency as they hit the ear drum because some sound bounces around the ear before entering the ear canal and impinging upon the ear drum, while some sound enters the ear drum direct. The later is a direct path and the former is the longer path. The sound that has the longer path interferes with sound of a different frequency which takes the shorter path causing it to be attenuated (reduced in volume). Henry's pocket creates an area where sound bounces around before exiting to the ear drum at the end of the ear canal.

This allows high frequency sound to stand out more and become more noticeable, which aids the cat in detecting the sounds that rodents make which are high pitched (ultrasound).

That is the theory and it is only a theory. The link at the top of the page takes you to a similar article which explains it differently! It is a rather complicated theory. No one else has proposed this.

Cats have better hearing than dogs and much better than ours. There range of hearable frequencies is much wider. Cats are superb at detecting and locating rodents through sounds.

Note 1: please see the comment: Anonymous 16 January 2016 at 07:15 which provides a very credible reason for the existence of this anatomical ear feature.

Note 2: this is a cross-post because I think the idea deserves to be posted on more than one website.
Email Post
Labels: cat anatomy cat ears