It is believed by some scientists that jealousy originates in siblings fighting over family resources.  In short, it is more about survival than being jealous over a potential interloper into your love life.

In respect of domestic dogs, a study conducted by the University of California indicates that dogs exhibit behaviour which is consistent with what we describe as "jealousy". 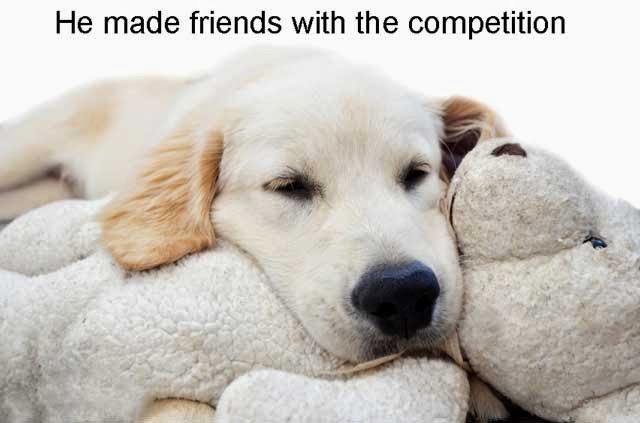 36 dogs were involved in the study.  The owners were asked to pay attention to objects other than their dogs and the attention that they paid to these objects was the same as if they were paying attention to their dogs.

The objects were a pop-up book, a plush dog toy and a bucket.  As you can see, one of these objects is very similar to a living domestic dog and the test was to see whether a dog responded more actively when the person was petting and stroking the plush toy compared to engaging in similar behaviour with the other objects.

A clear indication is that the dogs perceived the plush toy as an interloper into their relationship and the situation needed to be stopped through the dog's intervention.

This was perceived as jealous behaviours by the scientist but they appear to recognise that the underlying purpose of these behaviours was probably more to do with survival than as we perceive the meaning of the word “jealousy". How cat I stop my cat's jealous behavior? (note: the article linked to was written some time ago and what is written may clash with this page).

Once again, a study has indicated that dogs are able to experience an emotion which human regard as a secondary emotion and beyond their capabilities. Humans are rather egocentric and find it difficult to believe that other species of animal are able to feel what they feel and are driven by the same sorts of motivators that humans are.

My wish is that these sorts of studies educate people to respect the domestic cat and domestic dog more and learn to treat them as an equal in value to themselves.  This should help to reduce the number of unnecessary acts of companion animal euthanasia across the countries where companion animals are kept by people.

Notes: this is a cross post from the main website to increase exposure. The study referred to is published on the Plus One website. Associated post: Attention seeking behavior in cats. Dogs participated in the study for the convenience of the researchers, I suspect. My feeling is that cats display similar behaviors.